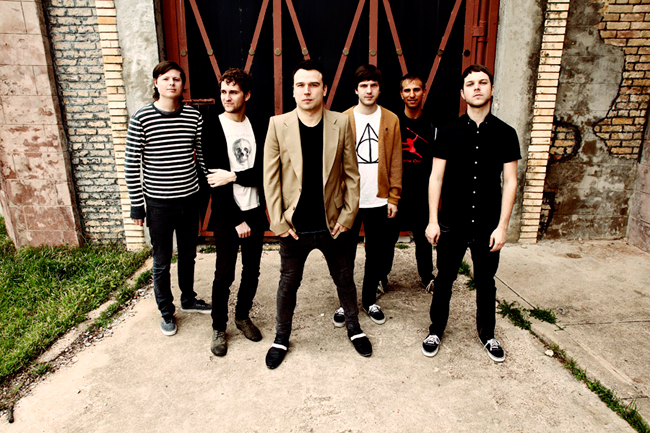 Alternative rock group Say Anything will be performing at La Zona Rosa on Sunday. Known for hits Alive with the Glory of Love and Shiksa, the group is currently on tour in support of their latest release, Anarchy, My Dear.

Alternative rock band Say Anything will do whatever they want. If they want to make a song about over-the-phone sexcapades (2004’s “Wow, I Can Get Sexual Too”), cover an Ol’ Dirty Bastard classic, or write an album dedicated to anarchy, they can. Say Anything’s fearlessness is what has kept them alive since their formation 12 years ago. As one of the many bands associated with the emo scene of the early 2000s, Say Anything has progressed and redefined its sound in ways that its contemporaries did not.

Currently on the road and stopping here in Austin for a Sunday night performance at La Zona Rosa, Say Anything front man Max Bemis spoke with The Daily Texan about the band’s new album, Anarchy, My Dear, exploring his edgier side and how the group’s cover of Ol’ Dirty Bastard’s “Got Your Money” came about.

The Daily Texan: Throughout the years it seems that both your music and lyrical content have matured. Where …Is a Real Boy was more autobiographical, your albums after that have addressed more universal themes. Is this due to you all wanting to challenge yourselves as artists, and does getting older also come into play?

Max Bemis: I think both of those things definitely come into play. People say that those songs [on …Is a Real Boy] were autobiographical, and they definitely were. But, they would mostly certain around negative aspects of my life; you didn’t hear things like, “Oh I had a good day today,” or “I went to the movies today.” Once all that pain went away, so did that type of writing, to some degree. It would be forced if I continued doing such a thing. What I think about now, no longer concerns myself that much. I do think more about the world around me, the people around me, larger things.

DT: With your new album Anarchy, My Dear, you’ve mentioned in past interviews that this album allowed you all to explore your edgier sides. What influenced that decision to build an album around that exploration?

Bemis: It was just a decision we made in relation to our career, and what was going on in our lives. As for me, I wanted to make this an unfiltered Say Anything record. Once I sat down and started writing the songs, lyrically, they all revolved around this idea of ridding the world of constraints on a metaphysical, spiritual and literal level.

DT: I read your Spinner essay on how you address anarchy, and how the word seems to have a negative connotation behind it nowadays. Why do you think that is?

Bemis: There are just so many ideals that over time are used for evil means, and become so distorted that your memory can’t help but associate it with all of the wrong it’s done in the world. In actuality though, some of those ideals, in their purest sense, could represent a noble thing.

DT: How did the band’s cover of Ol’ Dirty Bastard’s “Got Your Money” come about?

Bemis: We were asked to do a song for the [Punk Goes Crunk] compilation, and we chose ODB because he’s one of the craziest dudes of all time. The weird thing about the cover was that we wanted to make it very white sounding, and make it as if I’m not trying to sound like ODB, but some Jewish dude.

DT: If you could be any rapper, which rapper would you be?

Bemis: I can’t help but say Jay-Z. His life is pretty amazing; I respect the fact that he’s a family dude, and he’s a great rapper. I feel that there’s a universal respect for the guy.