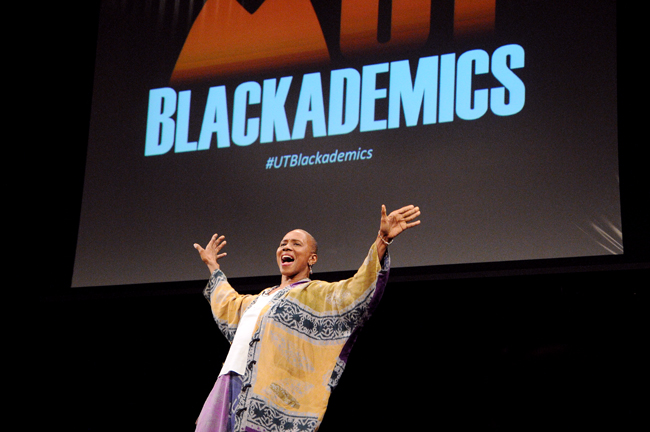 Dr. Omi Jones gives her poetic and theatrical presentation titled Art as Scholarship at KLRU Studio Thursday evening. This event, sponsored by UT Blackademics, featured presentations from four of UTs professors and was taped by KLRU in order to help raise awareness of African-American community issues.

Four professors spoke at a KLRU public taping sponsored and organized by UT Blackademics, a group consisting of a wide coalition of professors, students and public supporters working to raise awareness of current African-American community issues. By raising awareness, they hope to solve the issues and teach students how to be successful in their future initiatives through participation in these efforts. Members of the African and African Diaspora Studies Department presented during the taping, including associate professor Kevin Cokley, assistant professor Talia McCray, assistant professor Kevin Foster and associate professor Omi Jones.

UT Blackademics was founded by Foster in 2011 as a project for one of his graduate classes and is unique in the sense that it stresses community engagement as one of the primary means of accomplishing its goals, he said.

The advocacy group hopes to use the taping as a starting point for a future partnership with KLRU that would mean showcasing the work of professors in the department of African and African diaspora studies in a regular series, Foster said.

“[The department of African and African diaspora studies] shares the range of black studies research that is going on at UT,” he said. “This taping hopefully will be the first of many of these events that will go on here.”

“I liked the intellectual challenge they brought forth in terms of forcing us to think about these issues to better the black community,” he said.

Bill Stotesbery, KLRU CEO and general manager, said station management was happy to share the work of UT Blackademics because it is consistent with regular KLRU programming and goals.

“The range of subject matter the professors participating in this project are speaking about fits in perfectly with our continuing efforts to have in-depth community discussions on the issues impacting our city,” he said. “UT Blackademics is just one example of how KLRU works with the University of Texas and the local creative community to put together programming and events to bring people together.”