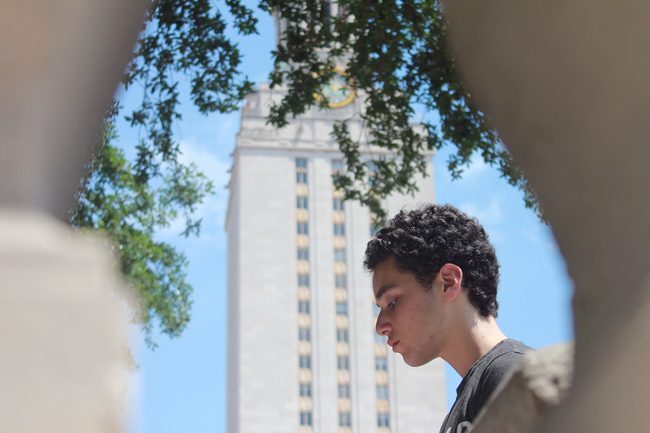 Disney enthusiasts had an opportunity to hear their favorite tunes ring throughout campus.

Austin Ferguson, music theory sophomore and member of the Guild of Student Carillonneurs, performed a playlist of 15 Disney songs on the carillon Saturday, the instrument controlling the bells at the top of the Tower.

The Guild of Student Carillonneurs is an organization that seeks to maintain a regular schedule of “bell ringing” throughout the academic year, where members can sign up to reserve a time to perform a piece of music at the Tower’s carillon.

“Playing the carillon is a lot of fun because it can be such an expressive instrument,” Ferguson said. “Some people think it can get boring and have a traditional sound, but if it is used properly, it can be a beautiful sound.”

The carillon resembles a mix of a piano and an organ, Ferguson said. The instrument has batons connected to wires which are connected to clappers. These clappers strike the bell and cast the sound that everybody hears.

To give students a break from the customary bell sounds, Ferguson said he decided on Disney songs because most students can remember listening to them throughout their childhood.

“Everybody really knows Disney songs,” Ferguson said. “I spoke with students as well as showcased songs on my YouTube channel to see what people would like to hear.”

Some of the songs on Ferguson’s playlist included “101 Dalmatians’” “Cruella De Vil,” “Cinderlla’s” “A Dream is a Wish Your Heart Makes” and “The Little Mermaid’s” “Under the Sea”.

Of all the songs performed, Ferguson said “Beauty and the Beast’s” “Be Our Guest” was his favorite to perform.

“The song is extremely difficult to play on the carillon, but it was a challenge that I loved taking on,” Ferguson said.

“Austin has been practicing hard over the past several weeks to put this concert together,” Meador said. “He managed to cover such a wide range of Disney songs and it was awesome.”

Business sophomore Sarah Taqvi said she wishes the concert took place during the week so more students would have been able to appreciate the change from the usual bell gongs.

“As a huge Disney buff, I was immediately able to detect some of the songs being played, and I didn’t realize until a friend pointed out that I was actually singing along,” Taqvi said. “I know many of my friends would have loved to hear these songs play, so I wish they would happen more frequently throughout the year.”