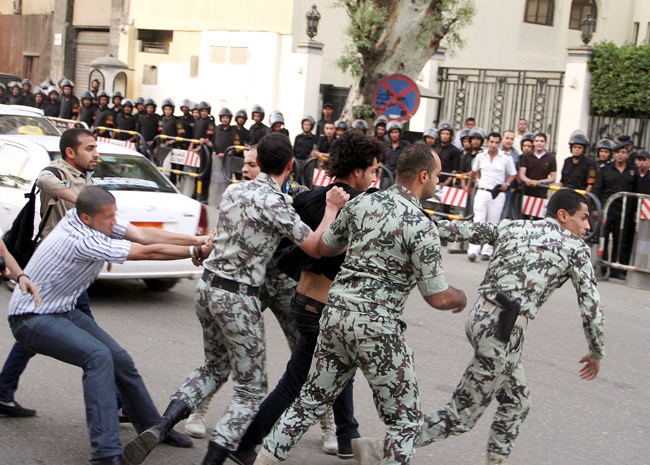 A protester is detained by security forces in front of the Saudi Embassy in Cairo during a demonstration to demand the release of a human rights lawyer detained in Saudi Arabia for allegedly insulting the monarch.

RIYADH, Saudi Arabia — Saudi Arabia closed its Cairo embassy Saturday and recalled its ambassador following protests over a detained Egyptian human rights lawyer in a sharp escalation of tension between two regional powerhouses already on shaky terms due to uprisings in the Arab world.

The unexpected Saudi diplomatic break came following days of protests by hundreds of Egyptians outside the Saudi Embassy in Cairo and consulates in other cities to demand the release of Ahmed el-Gezawi. Relatives and human rights groups say he was detained for allegedly insulting the kingdom’s monarch.

Saudi authorities denied that and said he was arrested for trying to smuggle anti-anxiety drugs into the conservative oil-rich kingdom.

The collapse of Hosni Mubarak’s regime last year in Egypt stunned Saudi Arabia’s monarchy, which saw it as a sign of its own potential vulnerabilities and how Western backing can suddenly shift away from longtime allies.

Saudi officials have increasingly viewed Egypt’s post-revolution trajectory — particularly the political gains by the Islamist Muslim Brotherhood — as worrisome trends that could encourage greater opposition in the Gulf.

A full break in ties between Cairo and Riyadh appears unlikely as the Arab League deals with the complicated showdown between protesters and the regime in Syria. But the deepening rifts underscore profound changes in the region’s hierarchy with Gulf states using their influence and relative stability to exert more leverage over wider Mideast affairs.

Tantawi asked King Abdullah to reconsider the decision, the Saudi news agency reported. The news agency said the king would look into the matter in the coming days and cited the two countries’ “long history of friendly relations.”

The Egyptian government issued a statement expressing its “regret” for the behavior of some of the protesters, and noted that the government and Egyptian people hold Saudi Arabia in “great esteem.”

The Egyptian news agency also published a copy of what it said was a signed confession by el-Gezawi admitting to drug possession, in a clear attempt to mute Egyptian public anger.

But the political arm of the Muslim Brotherhood, which is jockeying with Egypt’s military rulers for power, supported the demonstrators.

“The protesters in the past days were expressing the desire of Egyptians to protect the dignity of their compatriots in Arab countries and a reflection that disregard for the dignity of Egyptians abroad is no longer acceptable after the revolution,” the group said in a statement.

It was worst diplomatic tiff between the two regional powerhouses since Saudi Arabia and other Arab countries broke off diplomatic ties with Egypt after it signed a peace deal with Israel in 1979.

Diplomatic relations were restored in 1987.

Under Mubarak, the two regional powerhouses generally had strong relations.

But el-Gezawi’s case revived long-standing resentment over the treatment of Egyptians working in Saudi Arabia, which is a destination for more than a million Egyptians searching for better jobs.

His family said he had been convicted in absentia and sentenced to a year in prison and 20 lashes by a Saudi court for insulting the king. However he was not notified of the court’s ruling ahead of his Saudi trip. El-Gezawi had earlier filed a lawsuit in Egypt against King Abdullah over the alleged arbitrary detention of hundreds of Egyptians.

As Arab uprisings have toppled four longtime Middle Eastern rulers, Saudi Arabia has been worried about signs of rebellion within its borders. Authorities have met attempts to advocate for more rights, as el-Gezawi has done, or question the monarchy’s authority with strong opposition.

Many Egyptians suspect the drug case against el-Gezawi was trumped up.

El-Gezawi’s friend and lawyer Mohammed Nabil, dismissed reports el-Gezawi was smuggling drugs and said the lawyer may have confessed under duress. The lawyer’s wife visited him Friday and is due to return to Cairo late Saturday, Nabil said.

Outside the Cairo embassy earlier this week, protesters chanted, “Down, down with Al-Saud!” referring to the Saudi royal family and “Screw you, your majesty!” in reference to the aging Saudi monarch.

The demonstrators called for the expulsion of the Saudi ambassador in Cairo, and some raised their shoes alongside a picture of Abdullah, a sign of deep contempt in the Arab world. In the consulate in the port city of Suez, protesters blocked staff from leaving Thursday, prompting the military to evacuate them.

The Saudi news agency, quoting a foreign ministry official, said the protests were “unjustified” and attempts to storm the missions threatened the safety of diplomatic staff.

The agency also said the ambassador was recalled for “consultation.”

An Egyptian government official said the decision was largely motivated by security concerns over the protests. A staff member in a Saudi consulate said the offices will be closed indefinitely.

Both officials spoke on condition of anonymity because of the sensitive situation.

The Saudi ambassador had previously filed a police report against protesters from a youth group, accusing them of sabotaging his embassy during an unrelated protest.

Egyptian protesters also questioned whether the Egyptian government is doing enough to protect its citizens abroad. They rallied outside the Foreign Ministry in Cairo, demanding the Egyptian ambassador in Saudi Arabia be questioned over his handling of el-Gezawi’s case.

Many activists claim Egypt curbs its criticism so as not to alienate the wealthy kingdom or endanger Egyptian jobs there.