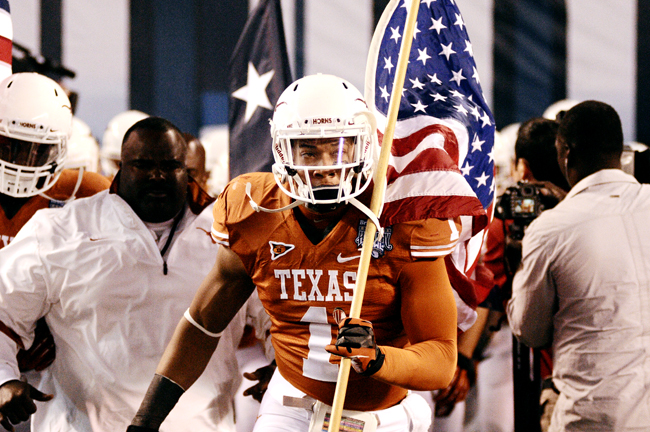 Keenan Robinson, 1, was the first Longhorn selected in the NFL Draft this weekend. The linebacker was a fourth round pick of the Washington Redskins. (Daily Texan file photo)

Although it took a little while and some patience, three Longhorns were selected in the NFL Draft on Saturday — the final day of the draft.

Keenan Robinson, a linebacker, was the first to hear his name called. Robinson was picked by Washington in the fourth round, 119th overall.

Robinson will be reunited with former Longhorn and two-time Pro Bowl pick Brian Orakpo who plays outside linebacker for the Redskins. The two played together when Robinson was a freshman.

He played inside linebacker as a senior and will look to make an impact in the Redskins’ 3-4 scheme. Linebackers are one of the Redskins’ strengths, so Robinson likely won’t be starting anytime soon.

“Keenan came in tall and thin and left about 240 pounds,” said UT head coach Mack Brown. “So he has improved his strength, his flexibility and therefore his range in his ability to make the big hit more than any player that I can remember.”

A few hours later, in the sixth round, the Cleveland Browns picked linebacker Emmanuel Acho. He was the 204th player chosen overall.

Acho could back up Browns returning starters Chris Gocong and Kaluka Maiava. Acho was an All-Big 12 senior and posted 131 tackles his final year as a Longhorn.

Even though Kheeston Randall was expected to be the first Longhorn drafted, he had to wait his turn and was chosen in the seventh round by the Miami Dolphins (215th overall).

“Kheeston Randall made more improvement last year than maybe any player we’ve seen at defensive tackle,” Brown said. “He became a force on the inside and he and our two linebackers are really going to be hard to replace.”

This year’s draft had the fewest Texas players selected since 2005 — when only three were chosen. It is also only the second time since 1990 that no Texas players were chosen in the first three rounds.

Fozzy Whittaker and Cody Johnson were not drafted and are now free agents.

With no Longhorns chosen in the first three rounds, this draft wasn’t the norm for Texas. But the last two seasons haven’t been either.