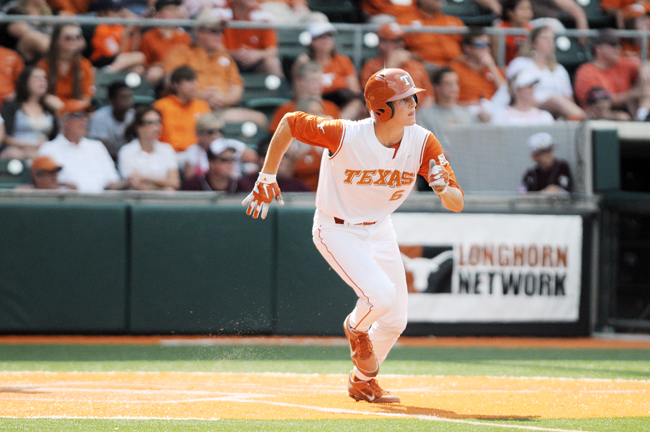 Erich Weiss went 2-for-4 and had two RBIs during Texas' 5-2 win over Texas A&M Prairie View.

For the second straight game, the Longhorns came back to beat A&M.

The only difference was that Tuesday’s win came against Prairie View A&M and it wasn’t nearly as dramatic as Texas’ ninth-inning rally in its 2-1 victory over Texas A&M Sunday afternoon. But after falling behind in the fourth inning against the Panthers, the No. 24 Longhorns (26-16, 11-6) used RBI singles from sophomore third baseman Erich Weiss and junior left fielder Jonathan Walsh in the fifth frame to take down Prairie View A&M (22-21, 13-7), 5-2, Tuesday evening at UFCU Disch-Falk Field.

“That’s kind of been like us all year,” sophomore right fielder Mark Payton, who racked up a game-high three hits, including a pivotal single.

Texas fell behind in the fourth inning when freshman pitcher Ricky Jacquez gave up a leadoff double to deep left-center field. The next batter, Brett Valley, beat out a bunt single down the third base line before Jacquez fielded a bunt by the following hitter, Brad Benes, and spun around to throw for a forced out at third base. But, Weiss was nowhere to be found and Jacquez recovered to throw the runner out at first base. Panthers clean-up man Dominiq Harris delivered a two-run single up the middle with the bases loaded that put the Longhorns in a 2-1 hole.

“The defense played well. That’s encouraging,” said Texas head coach Augie Garrido about his defense, which didn’t commit an error for the second straight game after committing eight in the previous two. “They made all the plays that they needed to make, except for the confusion twice on the bunt. Outside of that, it was a flawless game.”

The Longhorns roared back in the fifth frame. Senior center fielder Tim Maitland, filling in for the injured freshman Taylor Stell, was hit by a pitch for the team-leading 13th time with one out before Payton singled and freshman second baseman Brooks Marlow was also beaned. Then, with the bases loaded, Weiss singled softly up the middle to bring home Maitland and tie the contest at 2-2. That set the stage for Walsh’s sharp single to right, also with the bases loaded, that gave Texas a 4-2 lead and all the offense it would need.

Since April 13, the Longhorns are batting 8-for-12 (.667) with the bases juiced after hitting just 6-for-34 (.176) in that same situation previously this year. Weiss, who picked up the first of two bases-loaded base hits in that fifth inning, said that Texas has emphasized that situation more often in scrimmages recently.

“Coach Garrido talked to us about not seeing the runners on base and pretending like they’re not there and taking that at-bat like you’re a leadoff hitter,” said Weiss. “During the beginning of the season, we were hitting the ball well but we were hitting it right at them. Now they’re starting to fall in for us. About time.”

Stell, who last played in Friday’s 6-5 loss to Texas A&M in College Station, had surgery Tuesday to repair a knee injury he suffered in last week’s 4-2 victory over Central Arkansas. Garrido said that he’ll be out at least three weeks but hopes to have him back in time for the NCAA Tournament that begins next month.