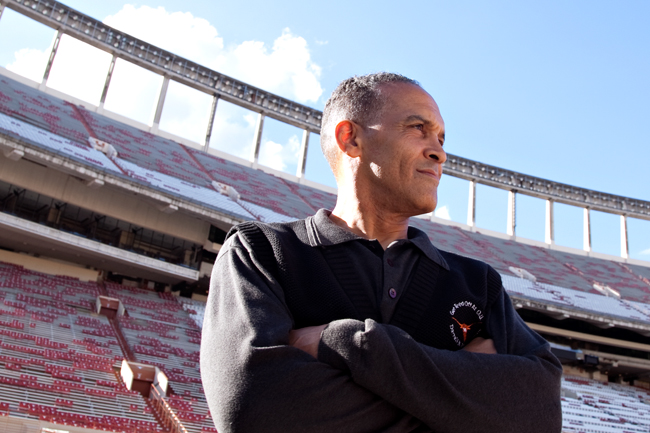 Texas fans rejoiced euphorically on Dec. 6, 1969, as the Longhorns defeated Arkansas, 15-14, in the national championship game.

It was a game that would long be celebrated for what the Longhorns had accomplished on the field, but history was also being made among the members of the team itself.

Behind the confetti, excited fans and post-game interviews was a historical change in college athletics that few were conscious of. The 1969 Texas team was the last all-white football team to bring in a national championship title. As his teammates battled the Razorbacks on the field, freshman Julius Whittier watched the televised game from Jester Center dormitory, ineligible to play as a freshman. By his sophomore year, as Texas contended for the national title once again, Whittier was a sophomore offensive lineman. He earned a varsity letter his sophomore, junior and senior year and started the latter two years of his college career and was the first African-American player to letter for Texas.

“I was a jock, plain and simple,” Whittier told The New York Times in an interview. “I didn’t care about civil rights or making a mark. I just wanted to play big-time football.”

But in the South, gaining one’s civil rights was no small challenge. Applicant Heman Sweatt sued the University of Texas in 1946 after being rejected from the School of Law because of his race. The law school’s segregation policy was overturned by the Supreme Court in 1950, but it took until 1956 for all UT’s academic programs to be integrated.

The integration of sports teams took place years earlier in the North. William Henry Lewis was the first African-American player in major college football and played at Amherst University from 1889 to 1891, and in 1942, Bill Willis played on the national championship team for Ohio State.

UT’s athletic programs took a bit longer to follow suit. African-American students weren’t allowed to participate in varsity sports until 1963, and the Southwest Conference was not hasty in recruiting African-Americans to play.

Head coach Darrell Royal attempted to recruit African-American athletes to play for UT, but many were turned off by the University’s reputation for racist tendencies and slow integration.

In 1967, E.A. Curry tried out for the freshman football team and earned a place on the roster but was sidelined by grades and did not continue to play for UT. In 1968, Leon O’Neal II became the first African-American to receive a football scholarship to the University but did not return after his first year.

Whittier was a standout player at an integrated San Antonio high school, blessed not only with a gift for the game but also an innate confidence and a self-described oratorical knack.

Despite the warnings of his friends and family, Whittier joined the team in 1969 as a freshman.

“I basically came here for my purposes, which was to play football,” Whittier said in an interview with Texassports.com. “In spite of what a lot of people thought might happen when I came up here, I had a ball.”

While Whittier has said he didn’t mind being the only African-American player on the roster, he’s also noted that he wasn’t always treated like every other member of the football team. He was not invited out to parties by his teammates and struggled to find a roommate his sophomore year.

Teammate Billy Dale, a senior running back who scored the winning touchdown of the 1970 Cotton Bowl, agreed to room with Whittier.

“I lost all my friends,” Dale told The New York Times. “I chose to live with Julius because I believed it would add that much more dimension to me as a person.”

Whittier’s tenure at UT paved the way for other black athletes. Running back Roosevelt Leaks was recruited in 1971, Earl Campbell in 1974.

Whittier’s time at UT also allowed him to cross into the path of Lyndon B. Johnson, who recommended that Whittier continue his studies at the University’s School of Public Affairs.

“I got a chance to go to graduate school,” Whittier told the UT football team during a 2010 visit. “I met President Johnson and he told me he would enjoy knowing I had at least examined the program at that school.”

Whittier followed Johnson’s advice, enrolled and graduated from the LBJ School in 1976. Today, he works as a trial lawyer in Dallas.

Whittier has repeatedly said that he doesn’t consider himself a pioneer, but head football coach Mack Brown feels a bit differently.

“He’s a hero,” said Brown in an interview with Texassports.com. “He opened doors for many other kids that have come behind him. Thank goodness that it’s a much better world today than it was in 1969.”

Whittier returned to UT in 2010 to speak to the team in a stadium named after his former coach. Brown made sure his players understood the importance of Whittier’s contribution.

“Think about it. This is history,” Brown told his team during Whittier’s visit. “You’re seeing history right here. You’re seeing the reason that a lot of you were allowed to come.”