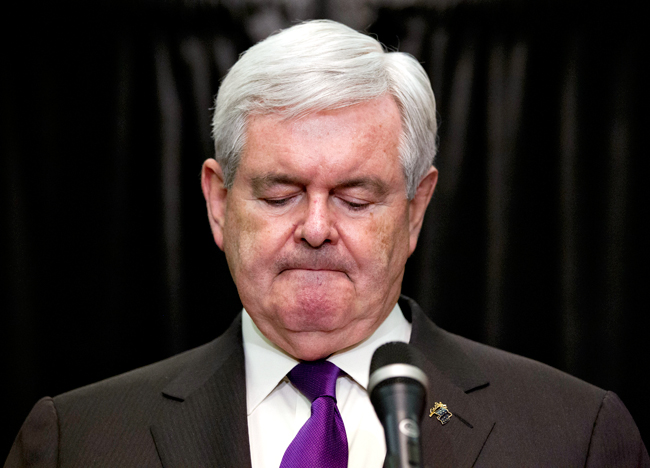 Republican presidental candidate, former House Speaker Newt Gingrich pauses while announcing that he is suspending his presidential campaighn on Wednesday in Arlington, VA.

Ending a campaign that seesawed between implosion and frontrunner and back again, Gingrich threw his support to his one-time rival as expected and promised his supporters he would continue to push conservative ideas. Gingrich bowed out of the race more than $4 million in debt and his reputation perhaps damaged.

“We are now going to put down the role of candidate and candidate’s spouse and take back the role of active citizens,” he said, adding he would continue to promote conservative ideas on college campuses, as well as through newsletters and films.

He also urged conservatives to rally behind Romney as a better alternative than Obama.

Gingrich saw extremes during his campaign. His senior staff resigned en masse last summer when Gingrich seemed unwilling to undertake a traditional campaign schedule of person-to-person campaigning and fundraising. Instead, he leaned on social media platforms such as Facebook and Twitter, as well as a steady stream of broadcast interviews he seemed to relish.

It seemed to work for a while. Gingrich plodded along with a proudly nontraditional campaign and strong debate performances. The showings helped him win in South Carolina — one of only two states he would win — but were insufficient to stave off Romney’s spending and organization in Florida. After Gingrich’s stinging January loss there, the always high-spending campaign seemed to sputter along while amassing enormous debt.

The campaign ended February with $1.5 million in the red but continued spending as though donors were coming.

The campaign now owes more than $1 million to Moby Dick Airways, the air charter company he used to ferry himself and his wife around the country, mixing campaign rallies with stops at zoos and historical sites. The campaign also owes the Patriot Security Group almost $450,000 for security services.

A raft of advertising agencies, consulting firms, pollsters, attorneys and former aides litter the list of those he owes money. He owes his former campaign manager, Michael Krull, more than $27,000. Top spokesman R.C. Hammond, who joined Gingrich at his final campaign event, is owed almost $4,000.

The campaign also owes JC Watts Enterprises — run by the former Republican representative from Oklahoma — some $35,000 for outreach to religious conservatives. Watts, who served in the House with Gingrich, endorsed his bid and vouched for the thrice-married admitted adulterer among skeptical social conservatives.

That’s not to say the Gingriches didn’t earn money along the way.

Gingrich Productions, which is run by wife Callista, was paid $67,000 last year. And Cushman Enterprises, run by his daughter Jackie Cushman, brought in more than $100,000 from the campaign.

As Gingrich was mulling an exit from the race, his aides were talking with Romney’s campaign about how his one-time rival could help him retire the debt. Romney’s team has offered to be helpful in that effort.

Printed on Thursday, May 3, 2012 as: Gingrich ends campaign, vows to help Romney