Title IX is more than just women getting to play 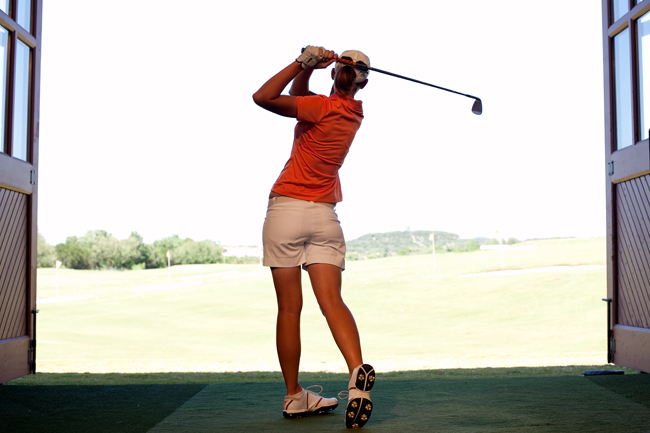 Womens golf coach Martha Richards traces her success both as a player and a coach to the passage of Title IX, and believes academics opportunites have increased mightily since the amendments inception in 1972.

Since Title IX’s inception, the landscape of college athletics has transformed immensely. The legislation, which prohibited sexual discrimination at educational institutions, has not only given female athletes the chance to play at the collegiate level, but has also opened doors for the rest of their lives.

For women’s golf head coach Martha Richards, her whole life can be attributed to Title IX. Richards played golf and basketball at Stanford from 1989-1993, and she has been coaching at the collegiate level ever since, with stops at Stanford, Boise State, Vanderbilt and finally Texas.

“I think I was one of those first-generation kids that really got to benefit from Title IX,” Richards said. “The doors that have opened since that legislation have just been tremendous. I know I am incredibly thankful, and I remember my mom telling me that while she was growing up all she could do was either be on the swim team or the cheer team. I feel so blessed that I had the opportunity to be a two-sport athlete at Stanford and to be able to coach at some great universities. None of that would have happened if Title IX did not exist.”

Title IX isn’t just about allowing women’s athletics to have a team with a roster and a few events here and there, but has evolved to where people can take interest and follow the teams, and become as accessible as men’s athletics. Although the money piped into men’s athletics is drastically higher than on the women’s side, this isn’t necessarily reason to object, nor is it a violation of Title IX. It is no secret that in this country, and especially in this state, football rules, and there is no female equivalent that provides the same amount of roster spots, event attendance or national coverage.

But it also doesn’t mean women’s sports have been left out to dry.

“I remember my freshman year of high school they had the same [basketball] uniforms as when they first started the program and they had half-inch thick polyester collars on them, flapping in my face as I ran down the court. My sophomore year we got new uniforms, and I would say that was definitely a product of Title IX,” Richards said. “To see how the national championship has changed over the years, even from when I played to when I started coaching to now, is night and day. It’s just a bigger event, and none of that has happened without Title IX. It has forced the hand of everyone involved, whether it is sponsors or the people who support the university, and made them realize that these girls can play.”

The evolution of Title IX has been staggering.

Besides providing opportunities for female athletes to attend a university on an academic or athletic scholarship, it has built the foundation for careers that would not have been available 40 years ago.

“I look at my job right now and I don’t think there would be as many female coaches, because we would not have had the opportunity to have all of those experiences,” Richards said. “When you think about [former Texas women’s basketball coach] Jody [Conradt] or [former Tennessee basketball coach] Pat Summitt, when they got into coaching they were really trailblazers, just because it wasn’t a profession that women sought out. Title IX has done more than just impact the experience you have as a high school or collegiate athlete. It’s also opened up the private sector to a whole new arena of jobs. It has provided women opportunities in the business world well beyond their college athletic years. The doors that have opened since that legislation have just been tremendous.”

“When you talk to the National team coaches, a majority of them want their players to come here and play college golf and believe that is the next place for them to go whether to help their country or to compete against international competition,” Richards said. “These players can continue training at no expense to their country.”

From the player perspective, it has allowed international athletes to see other parts of the world and experience American culture.

“One thing I wish South Africa had that America has is the way things work,” said freshman golfer Bertine Strauss. “How the infrastructure of the country is and how much easier it is to do things, from getting around, to doing everything online. Back home, a lot of things are manual. If I wanted to go the pharmacy, I would actually have to go there and give my form in, but here everything is done online and is so much easier.”

This summer marks the 40th anniversary of Title IX’s legislation, and the evolution of the NCAA in both men’s and women’s athletics during this time has been overwhelming. The games have grown so much that the NCAA now recognizes 20 men’s and women’s sports, from field hockey and bowling to softball, basketball and golf. Popularity has now reached the point that the 2016 Olympics will now have men’s golf for the first time since 1904, and women’s golf for the first time ever.

Printed on Thursday, May 3, 2012 as: Coaches, players benefit from historic amendment