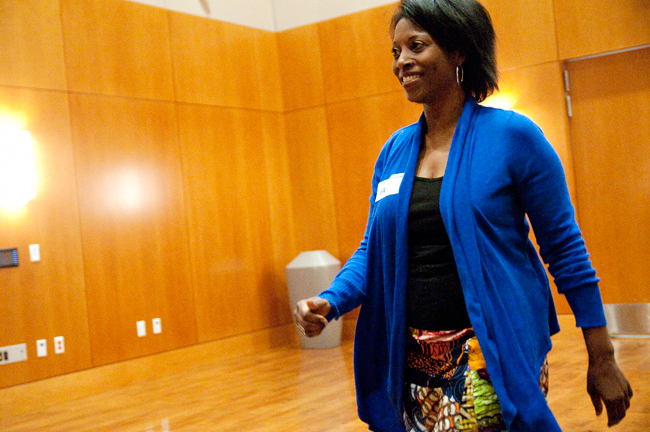 Professor Dorie Goldman appraches the stage to accept her Tower Award Wednesday evening. Goldman was honored for her Ghana Maymester program, in which students travel overseas to perform community service.

Executive director of the UT Autism Project, Pamela Buchanan, said she has always had a passion to do something worthwhile while engaging in community service.

Buchanan received the outstanding faculty/staff volunteer award at the 2012 Tower Award ceremony Wednesday evening. Buchanan has worked with families dealing with autism for 15 years, and co-founded UTAP seven years ago. UTAP pairs an autistic child one-to-one with a UT student who becomes his or her parent, guardian and safety net, Buchanan said.

Students, faculty and staff gathered yesterday to honor the award recipients for their community service achievements.

Sponsored by UT Austin’s Volunteer and Service Learning Center, the Tower Awards attempt to recognize outstanding service volunteers who have demonstrated a dedication to community service within the UT community and beyond, said VSLC director Yvonne Loya.

“The ceremony’s name reflects the dedication of UT students, faculty and staff to community service, who take advantage of their education gained at UT and effectively use it within the UT Austin community and beyond,” said Gregory Vincent, vice president of the Division of Diversity and Community Engagement.

The award ceremony began in 1999 as the UT Volunteer Recognition Ceremony, recognizing student volunteers in the UT community. Ten years later, UT students noticed certain groups such as faculty, businesses, student organizations and academic service learning programs were unrecognized for their outstanding service for UT, so the ceremony was rebranded as the Tower Awards, giving credit to all those who went unnoticed for their acts of service in the past.

Buchanan was one of many members of the campus community recognized last night for making a difference through community service.

“Pamela has a wonderful energy and is completely committed to the children with whom she works,” said Candlelight Ranch executive director Harriet Pozen. “I have heard numerous times from her staff that she is an amazing person to work for.”

UTAP partners with Candlelight Ranch who hosts various campouts throughout the year for the autistic children and their student mentors.

Chief Service Officer for the mayor, Sly Majid, the ceremony’s keynote speaker, offered congratulations to everyone receiving awards and gave a comedic speech over the current generation’s unparalleled opportunities to spread ideas and make a difference through service. Majid showed various Internet memes to the audience, conveying the ease with which the current generation can spread a certain cultural phenomena with the click of a button.

“Our generation is the most educated generation ever,” Majid said. “We have the ability to enact positive change if we organize and educate ourselves.”

Several students took home outstanding student volunteer awards, including Zachary Donaldson, Alpha Phi Omega service vice president, who won the gold presidential volunteer service award for completing more than 1,000 hours of service during the past 12 months. Alpha Phi Omega took home other awards, including the outstanding service project award for their Merit Badge University service project, which brings more than 5,000 Boy Scouts of America to UT in order to gain merit badges and get one step closer to their eagle scout rank.

The efforts of the UT community should be honored where so many are committed to service and to changing the world,
Loya said.

“UT is such a civically engaged campus, The Tower Awards are such a small sampling of all the service engagement throughout the year,” she said. “I wish we could award everyone for their service.”