Journalists being killed at ‘astonishing pace’ 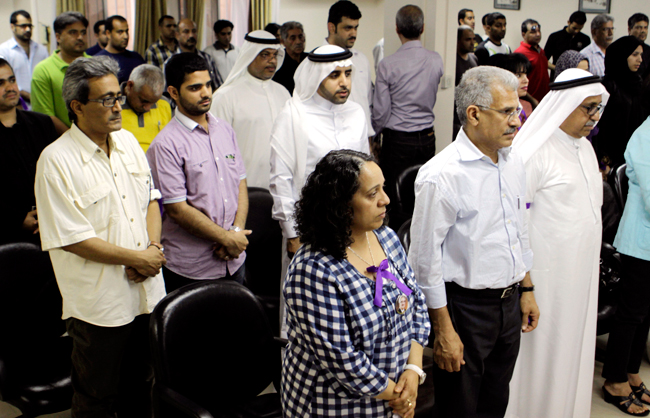 Journalists who were fired or suspended from their jobs for their opinions during last year's pro-democracy uprising hold a moment of silence Thursday in Manama, Bahrain, in memory of journalists killed and tortured in prison during a gathering to mark World Freedom Press Day.

UNITED NATIONS — On World Press Freedom Day, Reporters Without Borders condemned the “astonishing pace” at which journalists are being attacked and murdered — 67 killed in 2011 and 22 more deaths since the beginning of the year.

U.N. Secretary-General Ban Ki-moon called the attacks “outrageous” and urged all countries to prevent and prosecute violence against the media and take action to ensure the safety of journalists and freedom of the press.

At Thursday’s U.N. commemoration of Press Freedom Day, Ban Ki-moon asked the assembled diplomats, members of the media and civil society representatives to observe a minute of silence “in honor of the journalists who were killed in the line of duty last year.”

According to the New York-based Committee to Protect Journalists, 179 journalists were detained in 2011, a 20 percent increase over 2010 and the highest level since 1990, Ban said.

“Countless others face intimidation, harassment and censorship at the hands of governments, corporations and powerful individuals seeking to preserve their power or hide wrongdoings and misdeeds,” the secretary-general said.

Ireland’s President Michael Higgins, a former broadcaster, told the commemoration the deaths demonstrate the risks that journalists and media workers face and “their vulnerability to intimidation, violence and persecution.”

“Many were victims of targeted killings, while the circumstances of other killings may never be fully explained,” he said.

Reporters Without Borders updated its list of “predators of the freedom to inform” to 41 individuals and group. It said the first quarter of 2012 clearly showed that the world’s predators led by Syria’s President Bashar Assad and Somalia’s Islamist militias “are capable of behaving like outrageous butchers.”

The media advocacy organization, based in France, decried the increase in attacks and killings of news providers — up from 57 murders in 2010 to 67 in 2011, and 22 so far this year including five journalists killings in Somalia, four in Syria, and two each in Bangladesh, Brazil and India.

In Somalia’s capital Mogadishu, dozens of Somali journalists met Thursday in somber silence to celebrate World Press Freedom Day, a meeting that took place only hours after the killing of the fifth Somali journalist this year. Two armed men shadowed Somali radio journalist Farhan Abdulle after he left his station late Wednesday, then shot him dead.

The killings also continued in Mexico, which has become one of the world’s most dangerous places for journalists amid a raging drug war. The bodies of two news photographers were found dismembered in the eastern Mexican state of Veracruz on Thursday, less than a week after the killing in the state of a reporter for an investigative magazine. The Reporters Without Borders predators list was updated this week to include Vasif Talibov, leader of the Nakhchivan region in Azerbaijan, in addition to the country’s president, Ilham Aliev.

Azerbaijan’s U.N. Ambassador Agshin Mehdiyev, the current Security Council president, denied any repression of the media, telling a news conference Thursday that “we have a free press. … We don’t have any people imprisoned because of their professional activities or political views.”

In Tunisia’s capital, hundreds of journalists from around the world gathered for special World Press Freedom Day events held in a country where reporters long faced repression before protesters brought down the country’s dictator last year and sparked uprisings across the Arab world.

UNESCO’s director-general, Irina Bokova, and Tunisia’s President Moncef Marzouki, a former human rights activist, were among those taking part in events that included a conference on improving security for journalists and improving access to information.

“The days of control of the media are over,” said Tunisian Prime Minister Hamadi Jebali.
On Thursday, a Tunisian court convicted the head of a private TV station for disrupting public order and violating moral values by airing an animated film that some religious leaders say insults Islam.
The court in Tunis ordered Nabil Karoui to pay a 2,400-dinar (€1,200, $1,575) fine because his station, Nessma TV, aired the animated film “Persepolis” in October.

Secretary-General Ban told the U.N. commemoration that the world has seen over the past year and a half across the Middle East and North Africa “the central role played by social media, mobile telephones and satellite television in generating an extraordinary ripple effect: from a vegetable seller’s simple cry for human dignity, to the fall of autocratic regimes.”

“As the use of those tools expands, the world is likely to see more historic changes — and other applications that can advance human well-being,” he said.

Ireland’s Higgins stressed that billions of people are still unable to access the Internet and while the “digital divide” has shrunk somewhat due to the proliferation of mobile phones, greater efforts are required to ensure that the poor, elderly, disabled and those living in rural areas become connected and don’t become victims of greater inequality.

Printed on Friday, May 4, 2012 as: Reporters worldwide still write under duress