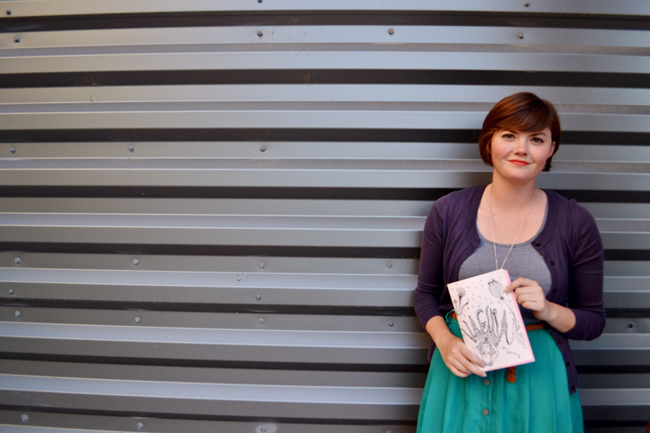 Hillary-Anne Crosby is the Editor-in-Chief of Vagi

Hillary-Anne Crosby is a woman undoubtedly assured of her prerogative. She is a sprightly, pixie-haired 22-year-old. She is a second-week graduate school dropout. She is witty but not sarcastic, and confident but not a snob. She is not ashamed or embarrassed to share with the world that she already has a bachelor’s degree and has never had sex. She is waiting for the right man and the right time, and neither are up for negotiation.

Crosby is the editor-in-chief and founder of Vagina :: The Zine. Vagina’s mission is to produce a creative outlet where girls’ names and work can be made public. The Zine, the spring 2012 issue which launches today, is printed four times a year and features a range of opinions and observations from its contributors.

The publication came about when the UT photojournalism graduate realized she had never fulfilled an internship, and felt unqualified for jobs in the journalism field. Crosby thought she was left to graduate without any prospects until she started to contemplate her own publication in the fall of 2010.

Crosby’s idea became a reality when Vagina :: The Zine launched its first issue January 2011, the semester that Crosby graduated.

“I’ve never done a zine and not one [of the contributing editors] has done a zine. None of us knew what we were doing,” Crosby said. “We all work full-time jobs and have other lives, and the zine requires a lot of time.”

Getting the Vagina zine off the ground was difficult, Crosby said. At first, not many people wanted to be a part of it, and Crosby and her team had to go through a learning process of trial and error. There were also many writers who agreed to submit their work and did not follow through.

“The reason I started the zine is because I wanted girls to get their work out there,” Crosby said. “We all had our blogs with artwork that no one was seeing.”

Whereas the zine’s title can feel awkward to some, Crosby said she’s never been called out for its name in a negative light.

“My parents were kind of uncomfortable with it,” Crosby said. “But for the most part people just smiled or laughed. I don’t think its offensive because it’s just a word. It’s like if you call a magazine Bitch, you give power to the word that was before a derogatory thing. It just sets us apart.”

While the Vagina title implies it is founded on a feminist platform, it’s not specific to activism or strictly leftist ideas; nevertheless, a feminist streak is embedded throughout the publication. Crosby said Vagina deals with everything having to do with women and accepts contributions from all who identify as female — contributors do not necessarily have to have a vagina.

Crosby does, however, consider herself a feminist. She has always read Bitch Magazine, a feminist response to pop culture, and came to figure that aside from Bitch, there weren’t many outlets that went against the grain of commercial mainstream mentality.

“You have Cosmo and Seventeen, which are fine, but I have beef with them in general,” Crosby said. “Our thing is just supporting the women in our lives who have real voices and talent — they deserve a spotlight.”

Basia Borodziewicz, a Plan II senior, is the new sex editor for the Vagina magazine.

“It’s a topic I’m really interested in, in terms of exploring sexual health and sexuality in general,” Borodziewicz said. “So I was excited about the opportunity.”

Borodziewicz saw the position as a chance to become self-motivated in order to become a better writer and be surrounded by more people interested in the same.

Hannah Doerge, a consistent contributor to Vagina for the past six months, started her feminist writing by submitting a three-part article series, “Separation of the Sexes.”

“[The piece] is a gender equality issue that focuses on how men and women are separated among achievements that they shouldn’t be separated by,” Doerge said. “It’s also about how this issue implies that women are somehow inferior to men.”

Doerge comes from a family with a political scientist father and a mother who went to college during the feminist movement in the ‘70s. “I thought feminism was a normal thing that everyone was into,” Doerge said. “I grew up in a liberal city and it blew my mind every time I heard somebody say something derogatory toward women, it was from out of left field.”

As a striving self-published writer, Doerge loves the fact that Vagina’s environment is such that everyone is serious about their role.

“I want to be a part of something that has so much enthusiasm and passion behind it,” Doerge said. “That’s why I keep contributing; it’s something worth contributing to.”