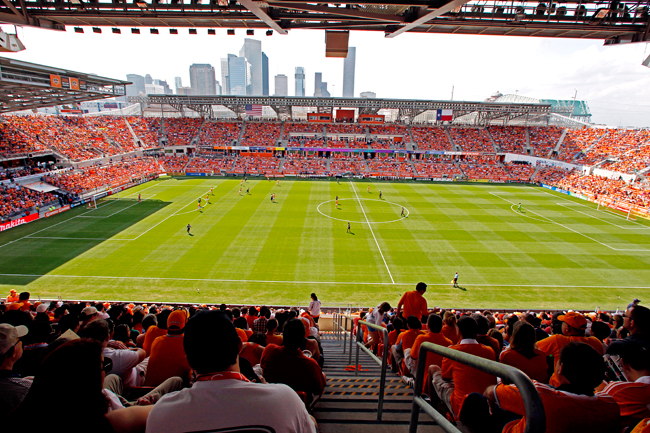 Since its inception in 1996, Major League Soccer has grown from 10 to 19 teams, and the world’s most popular sport has finally moved into the limelight here in the States.

Attendance numbers and TV ratings for MLS don’t come anywhere near those of the big three U.S. sports of football, baseball and basketball, or even England’s Premier League. However, there is hope on the horizon. According to Reuters, the average attendance for MLS games rose nearly seven percent in 2011 to a respectable 17,872.

For Houston Astros fans in 2012, that’s known as a new season-high, but I digress.

Houston is actually home to one of the biggest and most devoted fan bases in the MLS, with the Dynamo’s 2012 season average attendance figures nearing sellout numbers. The large Latino population in Houston may have been the first to support the Dynamo (briefly named the Houston 1836 when founded in 2005), but the Dynamo’s fans are now an eclectic mix of soccer lovers that saw their team win the MLS Cup in back-to-back years in 2006 and 2007, as well as a runner-up finish last season.

One downfall that the MLS has in comparison to bigger leagues like the Premiership is history. Whereas the Barclays Premier League is rooted in tradition and rivalries that date back centuries, MLS is merely an infant in the soccer world. Now, there’s nothing that is going to change that for quite some time, but as the U.S. comes to grips with the fact that soccer is here to stay, attendance and viewership will continue to rise.

The Dynamo have enjoyed recent growth among regular season attendees, and that’s partly due to their new home turf. Before this season, in which the Dynamo are 4-3-4, the team played its home games at the University of Houston’s Robertson Stadium. Not a terrible field, that is, unless it’s being overused. Unfortunately, that was exactly what happened. A run-and-shoot college football team and a rising MLS squad proved to be too much for the turf of Robertson Stadium, and plans were made to move the Dynamo off campus and closer to their big league buddy, the Astros. With a capacity of 22,039, BBVA Compass Stadium is the new home to the Dynamo, and it is certainly a sight to behold. The stadium’s architect, Christopher Lee, also designed Emirates Stadium in London, home to Arsenal F.C. The $95 million construction cost of the urban soccer oasis makes BBVA Compass one of the most cost-effective stadiums to be built in recent years. Newly constructed Red Bull Arena and PPL Park, home to the New York Red Bulls and Philadelhia Union cost $200 and $115 million to build, respectively.

BBVA Compass Stadium best resembles a giant metallic bird’s nest and is situated just off US Route 59, making it clearly visible to anyone travelling through the city. The visibility of the team’s stadium not only signifies the importance of the Dynamo to the city of Houston, but to MLS as a whole. Not every MLS franchise has a new stadium to call home, but as the sport continues to grow, there will be a bigger demand to house teams in functional environments that also allow for maximum capacity.

All numbers aside, it is clear that the sport of soccer is beginning to become more a part of the U.S. sporting culture than it ever has been before. Credit some of that to the FIFA video game series that has sparked an interest among the American youth for soccer, and some to both the men’s and women’s U.S. National Teams. They may not be the most exciting or rewarding teams to watch, but they have shown everyone that has been willing to watch that they can compete with the best soccer players in the world. Soccer in the U.S. clearly has a way to go to reach the audience that other leagues do on a regular basis, but there is a great foundation in place and plenty of history to be made in America.