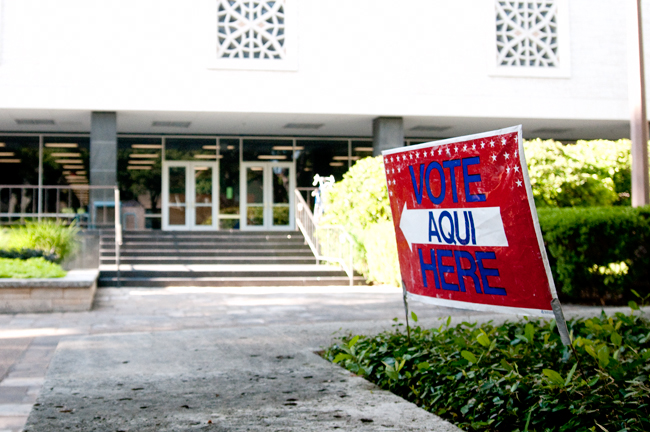 Students finally exercised their right to vote in the Texas primaries Tuesday after a two-month delay due to the statewide redistricting debate.

Redistricting judges held back the elections twice because the Texas Legislature did not agree on new district maps by the February deadline. Texas was originally set to hold the primaries March 6, but delayed to April 3 and then May.

As of 5:30 p.m. on Tuesday, the Flawn Academic Center, which serves the UT-area precinct as a voting hub, saw 33 people vote. Early voter results for Travis County released at 7 p.m. put President Barack Obama ahead with 16,882 votes in the democratic primary, or 96 percent of the vote. Republican frontrunner Mitt Romney had 12,381 votes, or 70 percent, in the GOP primary.

“The main race that would have drawn the student voters in would have been the presidential race, but it really doesn’t matter since we basically have those candidates selected now,” Casellas said. “Barack Obama has taken the Democratic nomination, and Mitt Romney is expected to take the Republican nomination tonight through the Texas primary.”

According to Section 5 of the Voting Rights Act, Texas, along with eight other states that historically discriminated against voters, must submit map redistricting proposals for approval by federal courts or the U.S. Justice Department. After the courts ruled the redrawn maps as unconstitutional, Texas legislators were forced to redraw the maps, which resulted in the delayed primary.

Travis County Clerk Dana DeBeauvoir said students did have the chance to vote in the early election by mail, and attributed low turnout to the busy beginning-of-summer season, rather than for political reasons.

“There are a lot of hot, local races that would still get people involved,” she said. “It’s just a really busy season for most families with holidays, graduations and so much more. I think that voting is second for many.”

The consequences of the delayed election are upsetting, said electrical engineering senior Alan An.

“It’s unfortunate that we missed out on deciding the presidential nomination,” he said. “I hope this doesn’t happen again.”

The biggest race remaining seems to be for the open U.S Senate seat, Casellas said.

“I think the main thing to watch is of course the US senate primary and whether the candidate David Dewhurst will get it,” Casellas said. “He needs 51 percent of the vote to win, and if he doesn’t get it, he will face a runoff election with the one who gets the second most votes, and that will be tea party favorite Ted Cruz.”