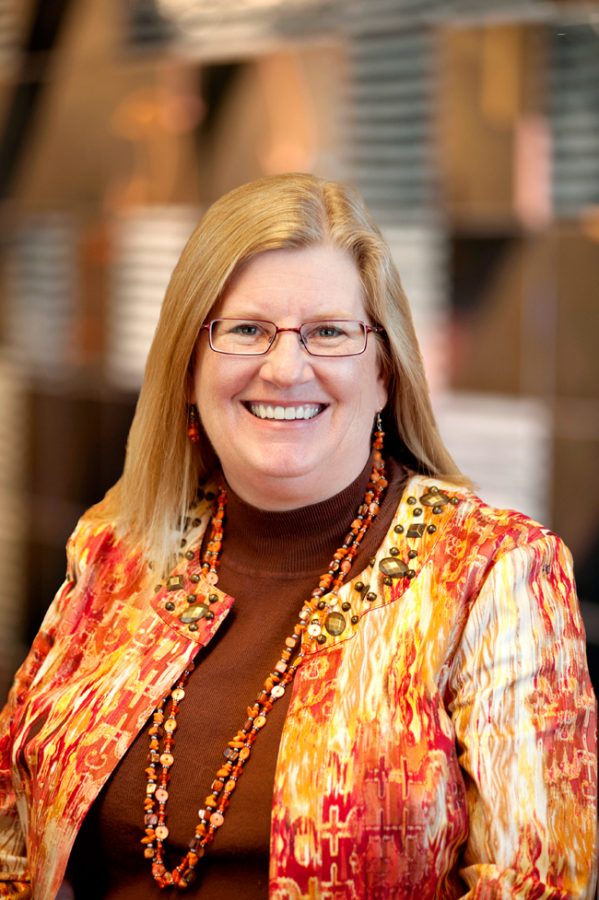 Editor’s note: Gage Paine was recently appointed UT vice president for student affairs, and begins serving Aug. 1. Paine is a UT graduate, and has served as vice president for student affairs at The University of Texas at San Antonio (UTSA) for the past five years. This is the first installment in a series of interviews the Editorial Board conducted with new hires at the University.

The Daily Texan: What steps are you going to take to make more healthy food available around campus?
Gage Paine: The first part is to find out what the issues and concerns are. If that’s the first question that you asked me, apparently there are some concerns, and I need to learn what they are. Then I need to learn what the parameters are and the options are. Sometimes you have contracts that you have to work with and those sorts of things. One thing we found very effective here [at UTSA] is that we surveyed students, and then we worked with [the food service provider] on our campus, Aramark, and then we worked to get those things on campus. It was a really good partnership. So really having some understanding about what students’ concerns are and even more than that, what students would like, and then seeing how close we can come to their preferences.

DT: What are the three groups of students on campus you believe are most under-served by the University?
GP: That’s a hard question for somebody who hasn’t been on a campus. The whole first thing I have to do, is get to know what’s going on, and find out what’s working and what’s not working. It’s the same thing if you’re talking about under-served students. Who feels like they’ve got a voice on campus and who doesn’t? The tricky part is if you don’t feel like you have a voice, you often check out. [My job] is to get to as many places on campus as humanly possible, and get to know students, meet students and find out how they’re connected to the University, or how they are not and why in both cases. I couldn’t identify three under-served groups at this point. I would be making assumptions and that’s not a very good place to start. So for me, its more about mechanics. How do I get to as many different groups as quickly as possible, to learn what’s working for them on campus and what’s not. That’s the overriding job for me in the first few months.

DT: What specific things do you foresee yourself doing in those first few months? How does one acquaint themselves with a university so big and so specific as UT?
GP: I [will] put on my metaphorical running shoes. I had a conversation with Dean Lilly about how to start building my schedule in those first few months. As everybody is coming onto campus, and it’s a new year, it’s a great opportunity to go to anything I’m invited to as much as humanly possible. So that might be an editorial board meeting. Obviously I’m going to go to an SG meeting. But is there another group that’s not one of the big, obvious ones that will be great for me to have an opportunity to go visit? And then I’m going to have to go seek that out some, too. But the first thing is for me to go meet as many people on campus as possible. That’s students, but it’s also student affairs staff, so I understand their issues and needs and programs they’re working on, and faculty and academic staff, because I need to know what’s going on there, too. So the first few months will be like trying to drink out of the fire hose.

DT: Sounds painful.
GP: Actually, it’s fun. Going all over campus and being new, and getting to say “talk to me,” tell me, because it’s safe to do. Because I didn’t create the program, I’m not going to get upset about it, I don’t have any vested interest in the status quo, so people are going to be really open about what’s working and what’s not. It is a priceless opportunity to learn about the campus and what’s going on.

DT: What were the missteps of your predecessor that you intend to avoid no matter what?
GP: (Laughs). I can’t talk about my predecessor. I saw Barbara Bush speak shortly after President Clinton was elected and she was very clear — respect the office sort of thing. If you’ve been on a campus at any time, if you’ve made a decision, somebody is not going to like that decision. That is a hard reality of being an administrator, there are decisions that have to be made, you make the best ones possible, some people will like them and some people won’t. So, do we make goofs as human beings? Yeah. You hope to mitigate those and go on. So I’m not going to talk about my predecessor. What I am going to say is there is a strong student and student affairs culture on the UT Austin campus, that is really an asset and creates a lot of opportunities. Part of why UT Austin is so much fun and so challenging is that the people who are part of that community care passionately, and they often disagree passionately. My job is to work through that as best as possible, to find the best solution for the campus as a whole, and how do we work together to solve those problems. I think it’s one of the best jobs on campus.

DT: Is there one leader on campus who you believe is crucial to the future of the University?
GP: An important consideration for me in saying yes to this job was that President Powers plans to be [at UT] for a while. Because he clearly is a strong leader on that campus. He has engaged the whole campus community in a way that doesn’t always happen at a really large campus. I’m leaving this campus [UTSA], and people are going to miss me but when I’m gone, they will move on without me. All of us in an institution like this can be replaced, and the institution will do okay, but from what I have seen, President Powers is a big part of the current energy at UT Austin, so that for me, as someone who is going to go work as part of his team, is very exciting.

DT: Are there savings that you intend to make to your department’s administrative costs?
GP: The reality is that we’ve always needed to be fiscally responsible. The change is that we have to think about it a little differently in this financial environment. It’s always important, it’s probably even more important that we’re spending the dollars we have in the best way possible. It’s not necessarily about making cuts though that may have to happen — it’s making decisions about whether these programs still serve the intended purpose as things moved on. You don’t need program “X” anymore because the need is gone. And maybe you take those resources and put them into program “W,” “Y” or “Z.” There needs to be a degree of flexibility. You may have to cut things. Is it people or is it programs? There are lots of different ways to think about resources. There’s not any way I’m going to say we’re going to cut money here or we’re going to cut money there because how do I know? [Right now], I just know the big picture of the budget, and just barely. But I do know that all of us have to be thinking creatively, have to be flexible, and have to be aware that finances are not an infinite resource. So how do we serve as good stewards of that money — both for the state and for the students?

DT: What is one thing you value every day that students should know about you and what you hope to accomplish?
GP: Education is a people business and so that’s the most important equation: How are people being impacted by what is happening? And I use “people” very intentionally, not just students, because if staff are not given the right resources, if they’re not valued, if they’re not having a good experience, then trust me, the student experience is impacted. My job is to pay attention, to make the University work for everybody who is a part of it; that’s for students to come and have a great educational and learning experience, that’s for people who work for the University to have a good work experience, because they spend more time there than students do, and that’s for members of the community who care about the University. The University needs to work for the people who are part of it. It seems to me, as the [VPSA], that’s my job. If I can make that happen, all those other pieces will work a lot better.