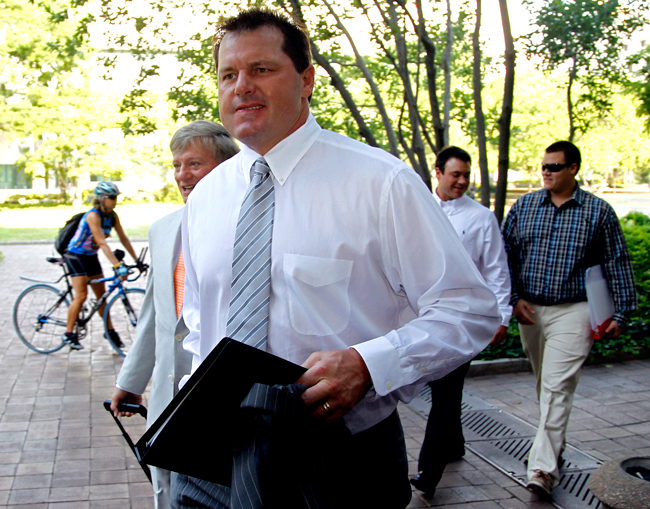 WASHINGTON— Roger Clemens’ lawyers tore into the prosecutors’ case against the former pitching great during closing arguments Tuesday, attacking the government for bringing the matter to court in the first place and mounting one last assault against Clemens’ chief accuser.

“This is outrageous!” said attorney Rusty Hardin, his face reddening as he pounded the podium.

Both sides received two hours to sum up their arguments before a jury of eight women and four men that will decide whether Clemens lied to Congress in 2008 about performance-enhancing drugs and several related matters.

“He chose to lie; he chose to mislead; he chose to provide false statements, to impede Congress’ legitimate investigation,” prosecutor Gil Guerrero said. “Now it’s your turn to hold him accountable on every single count. You are the final umpires here.”

Clemens is charged with perjury, making false statements and obstructing Congress. The heart of the charges center on his repeated denials that he used steroids or human growth hormone. Jurors were expected to begin deliberations later Tuesday, following 26 days of testimony over more than eight weeks.

“When you take that oath, you’ve got to tell the truth,” Guerrero said in a packed courtroom that included Clemens’ wife and four sons.

Guerrero accused Clemens of coming up with a “cover story” about the injections received from his former strength coach, Brian McNamee. Clemens told Congress the injections were for vitamin B12 and the local anesthetic lidocaine, but McNamee testified that he injected the pitcher with steroids and human growth hormone.

Guerrero said Clemens, one of the most successful pitchers of his generation and a winner of an unprecedented seven Cy Young Awards, told the lies “so as not to tarnish his name.”

Clemens’ lawyers spent much of the trial attacking McNamee’s credibility, and even McNamee acknowledged that details of his story evolved over time. During closing, Hardin produced a chart titled: “Brian McNamee’s testimony is admittedly not credible.” The chart included more than two dozen times in which Hardin said McNamee either lied outright or said something that resulted from a “mistake” or “bad memory.”

“Saying that Brian McNamee lies zero times,” Hardin said, “is kind of like calling the Grand Canyon a ditch.”

Guerrero conceded that McNamee is a “flawed man.”

“We’re not asking you to even like him,” Guerrero said. “Brian McNamee did a lot of things that aren’t nice, and we know that.”

But, Guerrero argued, that made McNamee the perfect partner for Clemens’ alleged use of steroids and human growth hormone, substances that Clemens wouldn’t be able to receive from, say, a team doctor or head athletic trainer.

Guerrero honed in on one defense witness, Clemens’ wife, Debbie. She testified that she had received a shot of human growth hormone from McNamee without Clemens’ knowledge, contradicting McNamee’s version that the pitcher was present for the shot. Guerrero said it stretched credibility to believe that Debbie Clemens allowed McNamee to come into their master bathroom without her husband’s knowing about it. One of the false allegations Clemens is charged with is that his wife was injected with human growth hormone without his prior knowledge.

The prosecutor said that Clemens should have told McNamee, “What are you doing in my master bathroom with my wife?!”

The reason he didn’t, Guerrero said, was that “he was there that day.”

The prosecutor also said that another false statement to Congress, about whether Clemens was at a pool party hosted by then-teammate Jose Canseco on June 9, 1998, was important because it occurred near the time the government alleges Clemens began taking steroids.

He noted that Debbie Clemens admitted during her testimony that the family stayed at the Canseco house the night before.

“It’s not just the party, folks,” Guerrero said. “He was there the whole time!”

Prosecutors have connected Clemens’ alleged attendance at the party to steroid use in vague terms: McNamee testified he saw Clemens talking at the party to Canseco, identified to the jury as a steroid user, and a third man, just days before Clemens allegedly asked McNamee for a first injection of steroids.

Hardin was indignant that the government would even ask for a felony conviction centered around whether Clemens was at someone’s house on a particular day. He said some of Clemens’ wayward statements to Congress simply came from a man trying his best to remember.

“He’s a Cy Young baseball player,” Hardin said. “Not a Cy Young witness. … He’s a human being just like everyone else in here.”

Hardin again produced a map showing that the government conducted 235 interviews with 179 people involving 93 federal agents or officers — all in the name of trying to find more evidence that Clemens used steroids and human growth hormone.

“Not one single blankety-blank piece of evidence after all of this effort. … Not one single bit of evidence for four-and-a-half years of anybody other than Brian McNamee connecting Roger Clemens to steroids and HGH,” Hardin said. “My God, if you’re going to go to this kind of effort to prove this man lied to Congress, you’d better come home with some kind of bacon. Not a zilch!”

Earlier Tuesday, U.S. District Judge Reggie Walton said he would allow jurors to consider the alleged false statement about Clemens’ alleged presence at Canseco’s house, although the judge indicated he might reconsider the matter if there’s a guilty verdict because of questions as to its relevance.

“I will permit it to go the jury, although I have some concerns,” Walton said before jurors entered the room.

Guerrero also tried to bolster the testimony of former Clemens teammate Andy Pettitte, who testified that Clemens said he had used human growth hormone — but then agreed under cross-examination it was fair to say there was a “50/50” chance he misunderstood Clemens.

“He didn’t want to testify against his friend,” Guerrero said. “No way. He played with him … They were almost brothers.” The prosecutor said that Pettitte “was jumping at the opportunity under cross-examination to say maybe 50/50.”

Clemens’ other lawyer, Michael Attanasio, told the jury that Pettitte’s “50/50” memory “is not evidence of anything” and shouldn’t be considered.

Attanasio also attacked the physical evidence produced by McNamee, who said he saved the needle and other waste from a 2001 steroids injection of Clemens and stored it in and around a beer can for some six years. Some of the waste was shown to have Clemens’ DNA.

“There’s no doubt,” Attanasio said, “the medical garbage is garbage.”

Argued Guerrero: “If McNamee was trying to fabricate this evidence, don’t you think he would have done a better job of it?”

After Hardin’s presentation, the court recessed for lunch, and Clemens and Hardin embraced for several seconds. Attanasio hugged Debbie Clemens a few feet away.

Clemens walked down the hallway with his four sons in tow, with one of the sons draping his arm around his father.