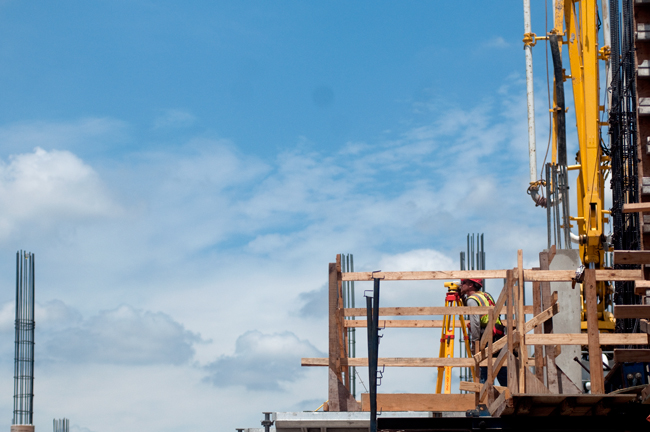 A crew member on the 2400 Nueces site works Thursday afternoon. Three construction workers were injured after suffering a fall at the site Wednesday afternoon.

Three construction workers were injured Wednesday afternoon while working at an apartment complex located at 2400 Nueces Street. Preliminary investigations by Hensel Phelps Construction Company, the general contractor for the complex, said one worker fell from the sixth floor of the complex, causing injuries to two other workers as a result.

All three workers were treated at University Medical Center Brackenridge for non-life threatening injuries and released by 6:45 p.m. that day. Construction at the site resumed Thursday morning and investigations involving Hensel Phelps are currently underway by the Occupational Safety and Health Administration, Worker’s Defense Project and the City of Austin.

“Hensel Phelps has an outstanding safety record and is committed to compliance with all rules and regulations. The company places the highest value on the health and safety of our workforce,” the company said in a press release issued this morning.

Jason Cato, anthropology graduate student and workforce development trainer for Worker’s Defense Project, said his organization has been looking into alleged violations at the 2400 Nueces Street site since February, including improperly supported scaffolding, missing and broken guard rails, reports from workers of rest-break violations and company failure to pay overtime.

“If [Hensel Phelps] was doing its job, there would not be any violations,” Cato said.

Patricia Zavala, workplace justice coordinator for Worker’s Defense Project, said reports from workers said the accident occurred due to high winds, and she believes preventative measures to suspend construction during turbulent weather should have been taken.

According to a 2009 UT and WDP report about working conditions in Austin’s construction industry, Texas is the most dangerous place in the country for construction workers, with one in five workers requiring a hospital visit at some point in their life due to a work-related injury.

Worker’s Defense Project is currently conducting a state-wide research study of working conditions in the construction industry throughout the state of Texas, Cato said.

“It’s more than should be happening,” he said. “Every violation is avoidable with proper safety training and precautions from the employer, and [Worker’s Defense Project] is looking into this.”