UT Concho Community Garden to expand after a year of droughts 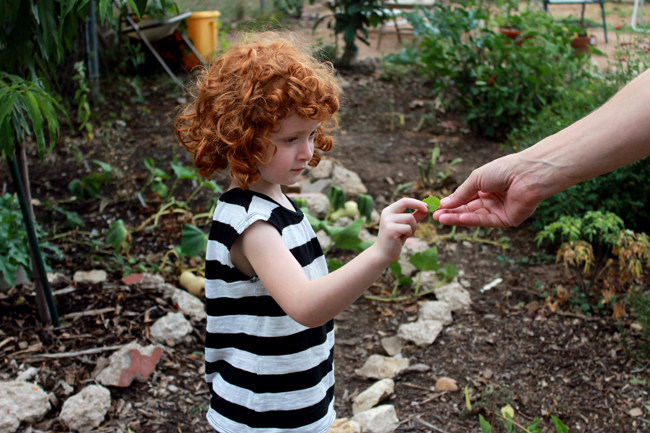 Nora Carney, 5, takes a mint leaf from her father to smell at the UT Community Garden Wednesday afternoon. Her family frequents the garden multiple times a week to learn about the plants and vegetables.

The garden, located on 2108 Concho St., consists of more than 30 plots, and includes five fruit trees: a peach tree, a gala apple, an Asian pear, a loquat and an Italian fig. Everything at the garden is grown organically, free of synthetic inputs and toxic pest control, and is grown for personal use, UT’s dining halls and local charities.

“The UT Concho Community Garden is place unlike any other on campus — it’s a place that’s continuously activated, created and evolved by its users,” said Daniella Lewis, architecture senior and Concho garden spokeswoman. “It provides a stress relieving environment where a micro community can form, which is especially important given the populous and overwhelming nature of UT.”

Lewis said at the garden, plot owners and volunteers executed ideas for the most innovative gardening structures that she has seen.

“Currently there is a wide spectrum of trellises all around the garden constructed of materials ranging from wood to plastic to PVC to bamboo,” Lewis said.

There’s a plot owner growing rice in a toilet bowl along with other creative materials being used in the garden, she said.

“Plots are bordered with a variety of materials too, including sheet metal and rocks,” Lewis said. “CDs hang from impromptu structures to keep birds away.”

Lewis said the project has improved since it began in spring 2011 and has plans to expand the garden and add new equipment.

“Soon we’ll be constructing a greenhouse made of recycled plastic bottles with Engineers for a Sustainable World,” she said. “We’ll also be installing a vertical garden, expanding our newly installed native Texas plants garden, building a bike-powered compost trailer, building an ‘insect hotel’ to host beneficial insects, expanding wildlife habitat and lots of other cool things.”

During the first months of the Concho garden, Texas was just going into one of its worst droughts on record.

“We didn’t even have a rain gauge, a very basic garden implement — actually since it never rained, I don’t think it even crossed our minds,” Lewis said. “By the summer our soil was basically dust. The garden was not very prolific.”

However, Lewis said this year has been the best yet. She said with all of the extra moisture and humidity keeping water retention in the soil, many plants flourishing, and with compost that has been piling up over the past year, soil conditions have improved dramatically.

“We have our first functional rainwater harvesting system installed, and plan on constructing more of these systems around our site to take advantage of rains when they happen and lessen our tap water consumption,” Lewis said. “Drought and climate change are serious environmental factors we must consider, and the garden is the perfect opportunity to implement smart and sustainable strategies.”

Meagan Jones, environmental specialist for the Division of Housing and Food Services, said DHFS, a supporter of the Concho garden, maintains three plots of herbs and vegetables that are served in the school’s dining halls.

She said DHFS used more than 180 pounds of herbs and produce harvested from UT’s own gardens during the 2011-12 academic year.

“We are also working with a student on the micro farm project that will hopefully get off the ground this fall, which will greatly increase the amount of food that is grown on our campus for the dining halls,” Jones said. “We have been working hard to increase the amount of local and/or sustainable food that we serve in the dining halls and have just reached 20 percent of food purchases from this category.”

Jones said growing 5 percent of the food used on campus would be incredible, but that the current gardens would not be able to meet the demand needed for the 5 million meals served last year.

“If the University continues to allow the expansion of the garden and micro farm projects we could possibly meet that goal in the future,” she said.