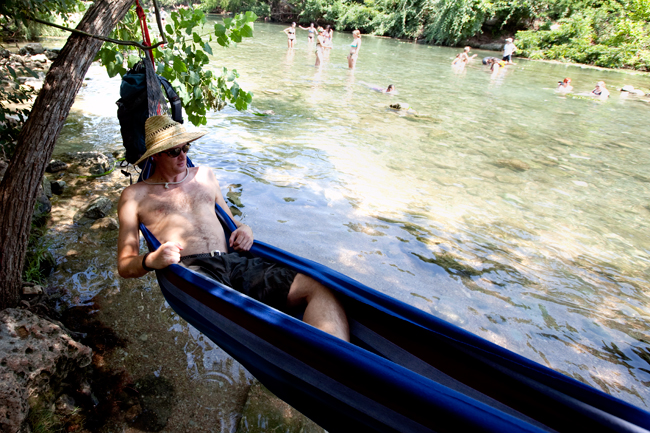 Michael Plemons relaxes in his hammock at the Barton Springs Spillway Thursday afternoon. Plemons said its a good way to beat the heat because hammocks are always attached to trees and in the shade.

Record high heat in Central Texas has Austin city officials worried about energy usage and public health, but experts predict the weather will cool off and not cause severe damage.

Temperatures in the triple digits throughout late June peaked June 24 at 109 degrees. Energy officials said Austin saw its highest recorded energy usage ever recorded for June but maintain Texas has enough energy reserves to keep the public comfortable in the heat. Troy Kimmel, UT geography lecturer and KEYE meteorologist, said cooler weather patterns can be expected in the coming months.

“At this point, I think we’re in a changing pattern even though it has started off a little on the warm side,” Kimmel said. “There’s an indication that the temperatures will trend back down, although still a little warmer than what we’d expect seasonably.”

Robbie Searcy, spokeswoman for the Electric Reliability Council of Texas, said last summer saw the highest energy rates ever recorded in Texas or Central Texas. ERCOT is a system operator that accounts for 85 percent of Texas’ electric load, according to the ERCOT website.

“Going into this summer, we anticipated that there would be some seriously hot days like we’re experiencing now,” Searcy said. “It was like it is now for most of the summer last year. It definitely was brutal.”

ERCOT has protocol set in place to ensure enough energy is maintained for the public to operate comfortably, Searcy said, but it is important for residents to do their part in reducing energy use to keep energy reserves stable.

“We basically try to operate with a few thousand megawatts (MW) of extra energy available in the event of an emergency,” Searcy said. “If we drop below 2,300 MW of reserves, we generate an Energy Emergency Level 1. There are steps ERCOT goes through to ensure energy remains reliable through those situations.”

An Energy Emergency Level 2 is called when energy reserves drop below 1,750 MW. At this point, certain industrial loads and other entities have volunteered to cease their energy use until reserves are stable, Searcy said.

“We had that situation a couple times last summer, and of course we increase our pleas to the public,” Searcy said. “Worst case scenario, within this context is if that didn’t work either and we’re still seeing reserves drop, there are a series of rotating outages that occur. That’s what we call an Emergency Level 3.”

Kimmel said signs of an El Niño Southern Oscillation pattern are apparent in the Pacific Ocean, which indicates residents should expect wetter conditions in the southern region of North America.

“The Pacific Ocean waters off the west coast of South America are showing signs of warming,” Kimmel said. “If that’s the case, then with time it would tend to get us a little more rain around here and more in the way of clouds.”

The Austin and Travis County Health & Human Services Department released a statement with tips for how to stay healthy and safe in the current heat, such as planning strenuous activity earlier or later in the day to avoid peak temperatures and avoiding caffeinated or alcoholic beverages.

With a heat-related fatality in Bell County reported June 24, Kimmel said it is critical for residents to constantly be in check with their health.

“Heat is kind of a silent killer,” Kimmel said. “It’s not like a tornado rolls down the street and takes you down. It’s something that can be rather benign in its onset. This is something that concerns us. I know the city of Austin has taken extra precaution with their employees.”

Kimmel said it is impossible to tell precisely how the heat will trend out for the rest of the summer, but residents should not jump to worst-case conclusions.

“Just because we started out the summer with this record high heat doesn’t mean we should assume that’s the kind of summer we’re going to have,” Kimmel said. “That’s a pretty dangerous assumption to make at his point.”