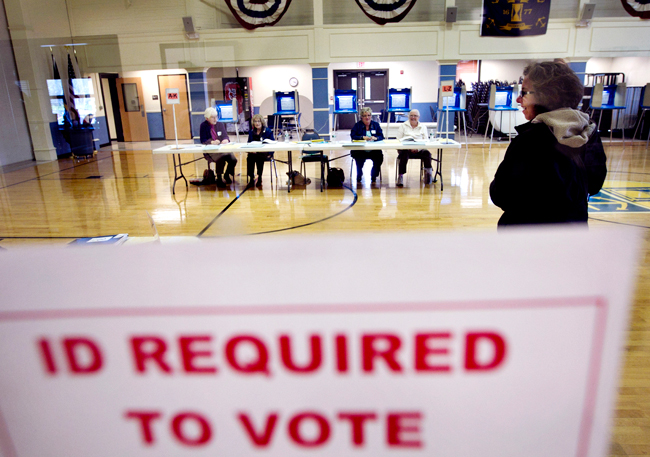 This April 24, 2012 file photo shows a sign at the entrance of a polling station in East Greenwich, R.I., advising voters that identification is required. President Barack Obamas campaign is recruiting legions of lawyers to handle disputes that may arise from now through Election Day. Thousands of attorneys and support staffers have agreed to aid in the effort, providing legal support that appears to be unrivaled by Republicans or precedent.

The fate of Texas’ controversial new voter ID law, which requires voters to show photo identification at the polls, is set to be decided this week in a federal court in Washington.

The state, which claims the law will prevent voter fraud, is seeking to persuade a three-judge panel to uphold the statute. The Justice Department and a slew of intervening groups say the law disproportionately affects minority voters, violating the federal Voting Rights Act. They want it thrown out.

The case will be a test of the Voting Rights Act, passed in 1965, which was designed to protect minorities’ rights to vote.

The Justice Department set up this week’s court fight when it blocked implementation of the law in March. Texas quickly filed a lawsuit in federal court, bringing the two sides back to Washington for the second time in months.

The two sides spent two weeks earlier this year arguing in front of a similar three-judge panel about Texas’ redrawn congressional maps. As now, the Justice Department claimed Texas was violating the federal Voting Rights Act. No final decision has been made in that case, but a federal court has approved interim maps that have allowed Texas elections to go ahead.

Texas plans to argue its law is a simple safeguard on voter fraud. The state already requires voters to show a voter identification card or other acceptable form of ID, but it has no photo requirement.

In an interview with The Associated Press, Texas Attorney General Greg Abbott said the new law is similar to those in Georgia and Indiana that have withstood legal scrutiny. He said he believed Texas’ law was in line with Supreme Court precedent.

“What the Supreme Court has made clear is that to get documentation and have a photograph taken … is simply not an infringement of the right to vote,” Abbott said.

The Justice Department and intervening groups will argue that the law disproportionately affects Hispanic voters.

They also say it addresses a problem that doesn’t really exist.

“The state’s argument has this notion of widespread fraud, when what we know from the evidence is that so far, for 2008 and 2010, there were 13 million votes cast across the state and of those 13 million, there’s been one indictment for voter fraud,” said Texas state Rep. Trey Martinez Fischer, the chairman of the Mexican American Legislative Caucus, one of the groups joining the Justice Department.