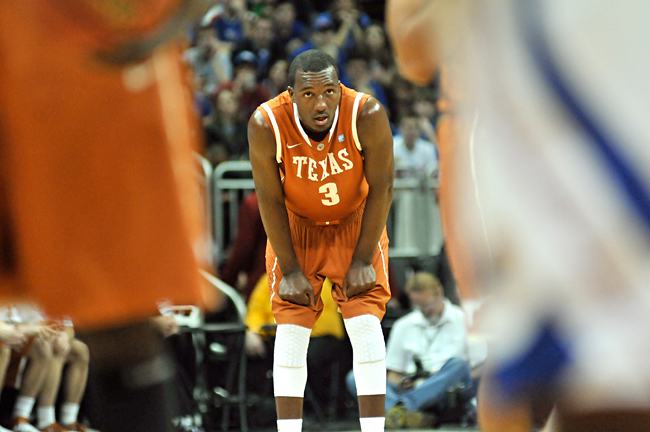 Hamilton plays against Kansas in 2011 Big 12 Championship game. Hamilton hopes to have a breakout second season in NBA.

DENVER — The difference between Jordan Hamilton’s freshman and sophomore years at Texas was stark.

The former Longhorn swingman is hoping for the same kind of improvement as he enters his second year with the Denver Nuggets.

“That jump,” Hamilton said, “is a learning experience.”

As a freshman, Hamilton was behind Justin Mason in the Longhorns’ rotation. Hamilton, who would not beat out a senior for a starting spot, carved a role for himself as an offensive sparkplug off the bench. Every so often, though, Hamilton would force shots, perhaps in an effort to compensate for a lack of playing time.

“A couple of guys played my position, you couldn’t take away from what Justin had accomplished in his [college] career,” Hamilton said. “I wasn’t going to come in and start right off the bat just because I was highly recruited.”

It wasn’t the easiest season, but Hamilton learned a lot. That much was evident when, as a sophomore, he led Texas in scoring with nearly 19 points per game, earned a spot on the All-Big 12 First Team and came off as a smarter, more mature player.

Now, it’s deja vu all over again. Though he was drafted in the first round of the 2011 NBA Draft, Hamilton sat on the bench for most of his rookie year with the Nuggets, playing in just 26 games. He was surrounded by players of his mold — score-first wingmen — and last summer’s lockout, which prevented Hamilton from working out with the Nuggets’ staff, didn’t help.

“In the shortened season, Coach played the guys who he believed in, the guys he knew,” Hamilton said. “There was no training camp, the rookies didn’t have much preparation time to show the coaching staff what we could do.”

Hamilton has turned himself into a gym rat this summer. He’s working out at the Nuggets’ facilities Monday through Friday and has trimmed down from 238 to 220 lbs., with designs to get to 215 before the summer ends. Offense has always come naturally to Hamilton, so he’s working on the other aspects of his game.

“I get hands-on treatment with the coaching staff now,” Hamilton said.

Nuggets general manager Masai Ujiri privately believes Hamilton would have been drafted within the top 10 picks if he had come out this season, and the coaching staff expects Hamilton to get much bigger minutes this season.

That luxury has allowed the Nuggets to sleep peacefully as shooting guard Rudy Fernandez heads back to Spain and take their time with the draft process, selecting French project Evan Fournier. The Nuggets are also reportedly considering trades for swingmen Arron Afflalo and Wilson Chandler.

“We thought, as George [Karl] has said, Jordan Hamilton is our rookie for next year,” said Nuggets president Josh Kroenke at this year’s draft night press conference. “We’re trying to stack them now where we develop them.”