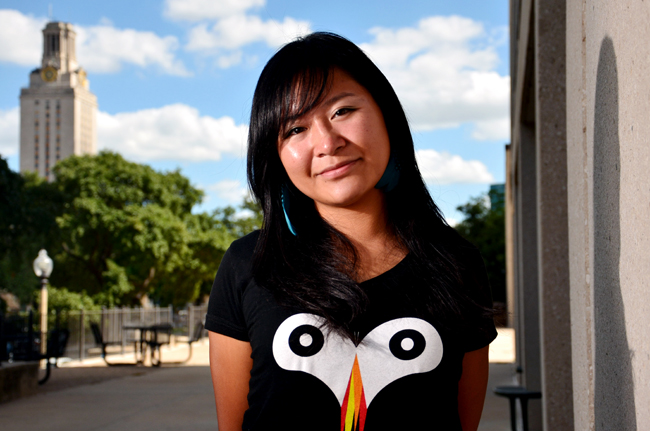 UT alumna Christine Chen was commisioned by the UT Venture Labs Investment Competition to edit a 30-second commercial to be aired Thursday on the NASDAQ tower in Times Square.

UT alumna Christine Chen is focusing on a tower, not the familiar UT Tower, but an oddly-shaped tower sitting in the heart of New York City.

This Thursday at 3:45 p.m. EST, the NASDAQ tower in Times Square will feature Chen’s 30-second commercial for the UT Venture Labs Investment Competition, a worldwide business competition that challenges students to create a new business and sell their ideas. Chen, a business administration alumna, and her film production company Moth to Flame were commissioned by Texas Venture Labs, a campus-wide initiative that works to promote creation of student start-up companies. She worked as a business consultant for three years before quitting and deciding to open her own film production company.

“Having my work shown on such a major screen just proves I made the right decision,” Chen said.

Chen said she was offered the opportunity by Aaron Lyons, who works as the Texas Venture Labs as a post-graduate manager. Chen said she and Lyons worked on a couple of commercials together prior to the NASDAQ project. Lyons said he chose Chen to produce the commercial because she has an eye for editing and putting it all together. Since NASDAQ sponsors the Venture Labs Investment Competition, UT does not have to pay to show the commercial at the tower.

“When you feel like a lucky person, you are even luckier because you look for these opportunities,” Chen said, referring to Moth to Flame’s latest opportunity. “Who knew knowing Aaron would lead to something so great.”

Christina Mabley, director of the McCombs School of Business MBA program, said she enjoys reading about Chen’s experience producing the commercial in the Moth to Flame blog because Chen makes it look easy.

“For a young company, there are always seminal moments that indicate you are going in the right direction,” Mabley said. “A debut in Times Square would seem to be one of those moments.”

Kelsey Pribilski, an intern at Moth to Flame, said Chen is the most hard-working and dedicated person she knows, and her hard work has paid off.

“Her hard work has gotten her a lot of places and I know if she continues with her work ethic and passion, she’ll have a very successful future.”

Chen said editing for the NASDAQ has required a lot of hard work, and provides updates on her progress on her Moth to Flame blog.

“I’m not used to editing for such an odd-looking structure,” Chen said. “Things you wouldn’t normally notice come out as clear as IMAX.”

Due to a reporting error, the June 25 version of this story inaccurately named Chen's company an editing company instead of a film production company.