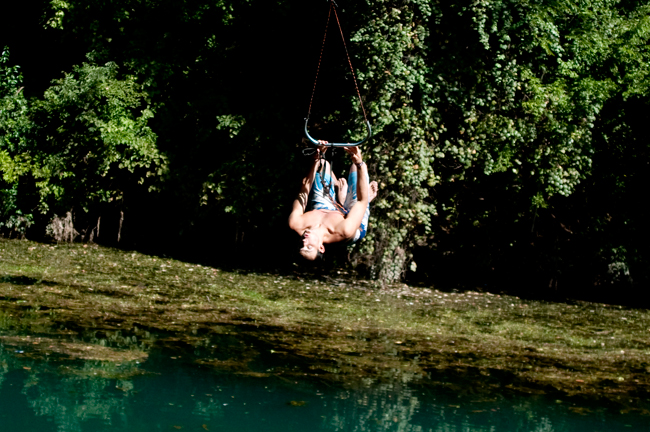 Corey, who declined to give his last name, flips off a rope swing at Barton Creek in Zilker Park.

UT’s sprawling campus leaves little room to park your car and not much space between buildings. Although some may not find sprawling vegetation on campus, it’s not far. Austin is home to more than 250 parks with many more in the surrounding area. When students take time to lift their heads from the books, many travel to some of the areas below to relax.

UT Turtle Pond:
Known as one of the most relaxing places on campus, the Turtle Pond is a great place for a picnic or even a nap. The snapping turtles used to lie below the surface and take pigeons when they came for a drink, according to the School of Biological Sciences.

Zilker Park:
Located near downtown Austin and right across Lady Bird Lake, Zilker Park has many attractions and traditions, including the 155-foot-tall Zilker Holiday Tree in December and the Zilker Park Kite Festival in March.

The Greenbelt:
Follow the river going through Zilker Park south on the Barton Creek Greenbelt Trail and you’re in a number of parks collectively known as the Greenbelt, full of hidden treasures including swimming holes, bouldering spots and the Airman’s Cave. Inside the cave, there is a collection of statues and art.

Eastwoods Park:
Just north of Jesse H. Jones Communication Center, the park has BBQ pits, basketball courts and more. The park has a statue of the donkey to commemorate the park as the original location of Eeyore’s Birthday Party.

Hamilton Pool Preserve:
Take a roadtrip to this pool on Texas Highway 71 through Bee Cave and turn left on FM 3238. The pool never dries up, and the area around it is has a variety of unique native plants.

Mayfield Park:
Located on 35th Street across Texas Highway Loop 1, Mayfield was once an estate but was donated to the city in 1971 for all to enjoy. The two-acre estate contains a historic cottage, gardens and peacocks.

McKinney Falls State Park:
The spot for camping, free fishing and wildlife observation. The old ruins of Thomas F. McKinney’s homestead, a rancher and businessman for whom the park is named after, are found in the park.

Hippie Hollow:
Only 20 minutes off Lake Travis, where clothing is optional. Some say a visit to the park is an exhilarating experience, but you’ll have to go yourself to check.