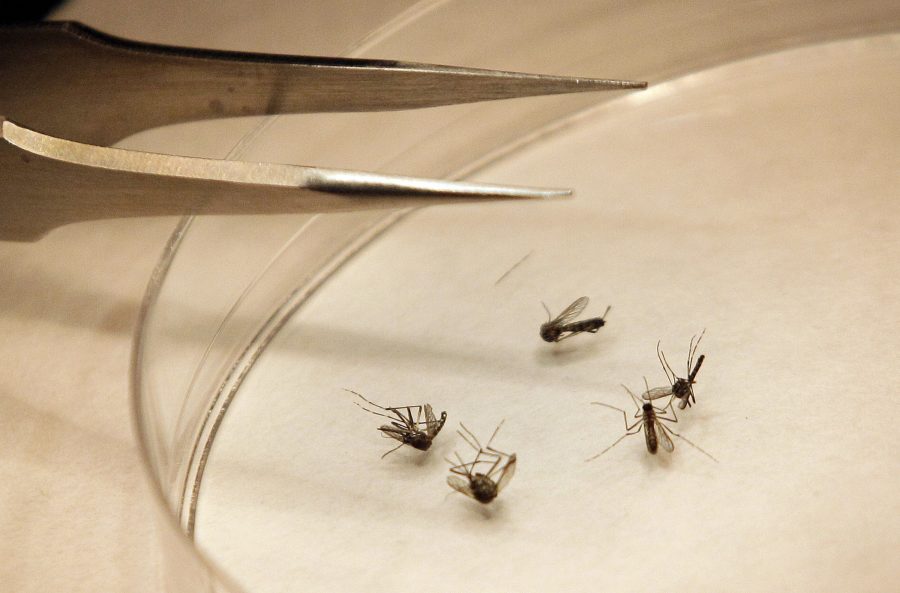 Mosquitos are sorted at the Dallas County mosquito lab in Dallas, Thursday, Aug. 16, 2012.

DALLAS (AP) — Communities across North Texas are boosting efforts to educate people about the West Nile virus as health officials await results of a weeklong aerial assault on a mosquito population that has put Texas at the center of a nationwide outbreak.

Workers in Dallas are passing through neighborhoods to hand out educational materials, drain standing water and apply larvicide to puddles. Other suburban communities are providing tablets to kill mosquito larvae and using automated phone messages and social media to spread word about the mosquito-borne illness.

The strategies were implemented this summer as the virus has infected hundreds of people and killed more than 20 others across Texas — more West Nile deaths than all other years combined. The Dallas County area has been the hardest hit, with about 300 falling ill and the death count around a dozen.

The illnesses prompted aerial spraying earlier this month in Dallas County for the first time since 1966 when encephalitis was blamed for more than a dozen deaths. Now thousands of firefighters, police officers, code enforcers and other city employees have shifted their focus toward stamping out the growing epidemic, which the Centers for Disease Control and Prevention has called one of the largest West Nile outbreaks seen in the U.S.

More than 1,100 illnesses have been reported across the country, about half of them in Texas.

“We absolutely must keep communicating with residents,” said Dallas city spokesman Frank Librio. “Even though aerial spraying has ceased, ground spraying will continue. But we have to keep the public education messages out there because there are still four to six weeks of mosquito season.”

Experts think the mild winter, early spring and very hot summer helped stimulate mosquito breeding and the spread of the virus. Mosquitoes pick up the virus from birds they bite and then pass it on to people.

Officials have not ruled out making another round of aerial spraying if necessary and should know within the next week and a half whether another round is needed.

Meanwhile, city staffers in Dallas are going door to door handing out educational material on West Nile. They have also picked up more than 800 abandoned tires, which often collect water where mosquitoes would breed.

The city’s new Website dedicated to spreading West Nile information has nearly 100,000 hits, while Facebook and Twitter each reach around 2,000 fans and followers. The city more than a dozen digital billboards and made about 250,000 automated calls to alert residents about when aerial spraying would occur.

Dallas resident Rod Baird said the city was responsive when he reported some standing water in an alley behind his home, but he thinks the city’s education efforts should involve more neighborhood involvement and less social media.

“Not everybody is connected that way (through social media or cell phones),” he said. “I think placards and billboards are better — maybe handouts in grocery stores.”

Garland, a city northeast of Dallas, employed a new “code red” system that alerts neighborhoods of a West Nile virus case or death reported in their area. The city uses automated phone messages to get the word out before sending crews to those areas for targeted spraying.

Garland Deputy Director of Health Jason Chessher said that “unless they live in a cocoon” everyone in Garland is aware of the West Nile virus problem and what needs to be done to curb it.

Facebook has been essential for spreading the word in the community of Mesquite just east of Dallas. In the last week, Mesquite’s Facebook traffic increased by 61 percent, a direct result of the interest in West Nile virus, said spokesman Wayne Larson.

University Park, a town surrounded by northern Dallas, normally fogs for mosquitoes once a month, but has increased that frequency to at least once a week, and sometimes several days in a row.

It has so far provided around 200 households with free mosquito dunks, or tablets used to kill mosquito larvae in water. City personnel have visited hundreds of homes upon request to look for and treat standing water.

“We want to hear from residents,” said spokesman Steve Mace, who said the city has been doing more West Nile education this year than in the past.