GOP convention gets rowdy in rift over Ron Paul 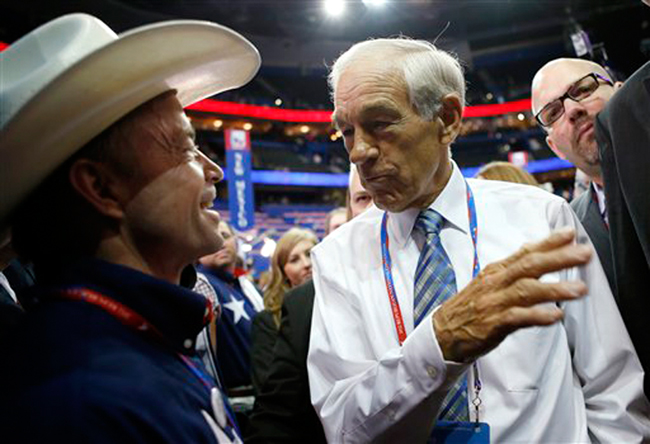 Rep. Ron Paul, R-Texas, talks with a Texas delegate on the floor at the Republican National Convention in Tampa, Fla., on Tuesday, Aug. 28, 2012.

The brief uproar was a rare unscripted moment in a carefully-choreographed convention that organizers hoped would showcase Republican harmony over nominee Mitt Romney. After the voice vote on the rules, the next speaker was quickly called in an attempt to limiting the amount of time Paul’s supporters had to chant “Shame on you.”

Paul delegates saw them as a power play by the Republican old guard.

“If you’re trying to win a presidential campaign and put on a show, you shouldn’t poke a sharp stick in the eye of conservative activists. That’s what happened,” said Colorado delegate Dudley Brown, who leads a gun rights organization back home.

Paul didn’t win a single presidential primary but he got 190 delegate votes during the roll call of states that officially nominated Romney Tuesday. Romney got 2,061.

Paul briefly showed up on the convention floor, signing autographs and posing for photos. As he left the arena, he declined to say if he felt his delegates were being treated unfairly. “I’ll let you know when it’s over,” he said.

Paul later said in a broadcast interview that he has no plans to endorse anyone for president.

“I am endorsing, you know, peace and prosperity and individual liberty, the Constitution, and I’m more intense on that than I am on the politics of it,” Paul told Fox News.

Supporters of the new rules say voters expect the delegate count to reflect the outcome of state primaries and caucuses. The convention’s rules committee made some late revisions to the new rules to placate party activists who weren’t necessarily Paul backers.

The new rules originally allowed presidential candidates to choose which delegates would represent them at the convention — taking that power from state parties. However, in a concession to local activists, party leaders agreed to remove the language. Instead, the rules say that delegates who support candidates other than the one they are obligated to support shall have their votes deemed “null and void.”

“These rules will provide a strong governing framework for our convention and for our party,” said former New Hampshire Gov. John Sununu, who headed the rules committee.

“None of us want a campaign overreaching,” Barbour said. “We want bound delegates to live up to their commitment.”