Upperclassman reflects on UT experience at Gone to Texas 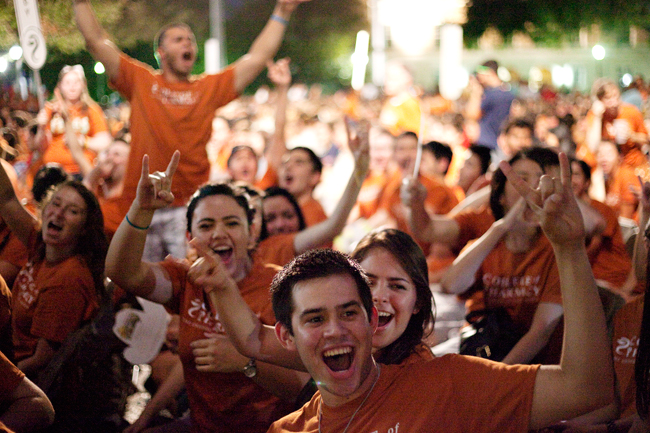 Pharmacy school students cheer during Gone to Texas Tuesday. Each college held separate gatherings before all congregating at the Tower.

I expected attending Gone to Texas in the middle of my college career would feel different from attending it as a freshman. After all, the past two years of college have changed my view of this massive and wonderful place. Watching the UT System Board of Regents and the UT-Austin administration fight out their ideological differences by way of newspaper editorials, ominously named committees and rumors of President William Powers’ termination has made me both more cynical about and more attuned to the political motivations that affect our university. I predicted that this year’s Gone to Texas would hint at the importance of graduating in four years, at the crucial role of research at the University, and that it would walk a fine line between mouthing off at the regents and telling them what they want to hear. It was wonderfully refreshing, then, that last night’s festivities steered clear of obvious references to the battles being fought on the 40 Acres and focused instead on the University’s many victories.

The ceremony began at 8:30 p.m. when a commercial featuring Powers lit up the tower, leading the students to look up as his distinctive voice fell over the audience. In the video, Powers vowed to make this the “best public university in the nation,” a phrase I find admirably absent of bravado — he didn’t say we are the best — and yet full of enthusiasm for the University.

At the video’s end, a performance by the Innervisions Gospel Choir begins. Soon, the choir launches into a gorgeous breakdown of the “Eyes of Texas,” and the audience began to hoot, holler and applaud. As the song ended, Thor Lund and Wills Brown, the student body president and vice president, filed on stage for a scripted speech. Their most charming moments occurred when they forgot to read off their papers and broke into unplanned moments of Brown pointing into the audience and waving around his horns. Of course, at least one of them, Brown, made mention in his speech of the Texas Constitution of 1876’s mandate that UT be “a university of the first class.” Though people on both sides of UT’s ideological battles often use this quotation in their arguments, Brown’s use of it appeared to carry no between-the-lines implication of what “first-class university” should mean.

Throughout the night, however, the programming offered some hints at what a “first-class university” should be. The event included over 20 minutes’ worth of programming devoted to praising research and the opportunities it gives students. Alexa Van Brummen, a senior involved in research, shared the story of how she found her way into a competitive research lab as a mere freshman. She then encouraged students to follow a similar path. Another video showcased how research by mechanical engineering professor Rick Neptune has made better-fitting prostheses available to amputees. While the regents’ disagreements with UT administrators over the role of research in higher education were never directly referenced, the amount of time spent on the subject serves as a reminder that the conflict continues.

Finally, Powers took the stage. Every time I hear Powers’ voice, I can’t help but feel like I am standing in a smokehouse in Luling, Texas, and he is about to emerge from the back with a giant slab of brisket, although the mass of freshmen sitting in front of me last night almost certainly didn’t make the same connection. They too seemed intimidated by the gravelly-voiced Powers, who has a calm confidence about him that I must subconsciously associate with Texas barbecue. “All too soon I’ll see you at graduation,” he said to the freshmen, reminding them of the “bookend” nature of Gone to Texas and their graduation: one you attend as an incoming freshman, the other as an exiting senior. A video of previous commencement speakers followed, and the nod toward the end goal of “going to Texas” — making it to graduation — had sufficient gravitas to quiet the now antsy crowd. As the video ended, a spotlight landed on the academic seal. “You are now and forever identified with Texas,” Powers said. A cheer went up, and I felt my cynicism flare — what exactly does “identifying with Texas” mean when so many people are fighting over the University’s purpose?

But alas, Gone to Texas rightfully left no place for a grim upperclassman like me. Before I can turn to a friend and make a move, the band swept in and the celebration started.

Printed on Thursday, August 30, 2012 as: Issues lurk amid celebration