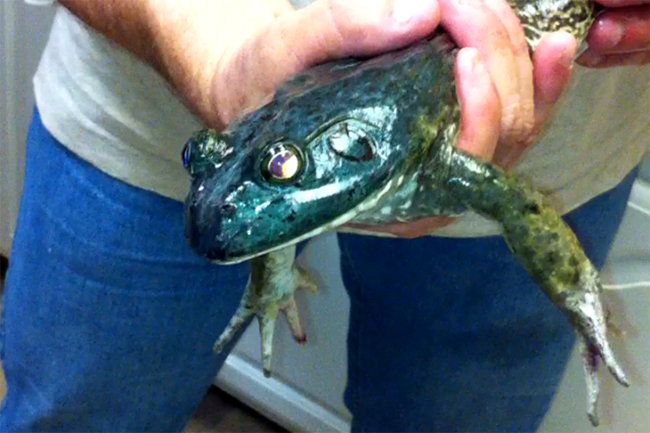 The sapphire coloring of this bullfrog only occurs in one in a million of the species.

Chad Stinson has worked for the U.S. Fish and Wildlife Service for 11 years and has a master’s in aquatic biology. When I ask him if he has ever heard of such a thing as a giant, fluorescent blue bullfrog, he shakes his head and deadpans, “Never heard of it.” This is ridiculous, since both Chad and I have put a pause on our regular work schedules and driven a considerable distance because of just that: a giant, fluorescent blue bullfrog.

Two weeks ago I got an excited call and a picture message from my mother’s long-time boyfriend, Stanley Jasik. The picture was of a sapphire-colored bullfrog sitting in the Texas dirt. The call was to tell me that a team of federal biologists was coming to his ranch to catch the extremely rare frog, which Stanley had discovered the day before while fishing in his pond. So naturally, I did what any curious reporter and student of biology would do: I told him to not alert other news sources and jumped in my car, my best frog-catching outfit on hand.

When I pull up the drive to the ranch, Stanley immediately directed me to the edge of the pond, where the blue bullfrog sat lazily, unaware of both its color and its scientific rarity. In the evening light, the frog had turned a beautiful shade of indigo, hinting at the root of its odd condition. Frogs appear green because of a complicated strata of skin cells: the bottom layer of skin involved reflects back blue light that is then filtered through a layer of yellow pigments, which is why frogs appear green (recall from your kindergarten class that blue and yellow make green). While all frogs are able to change the shade of their skin by changing the amount of yellow pigment in the second layer, a bullfrog that appears blue has a genetic mutation that prevents it from forming yellow pigment. So when the blue bullfrog attempts to adjust the shade of his skin to better match his environment — i.e., as the sun sets in the evening — unlike normal bullfrogs, whose skin can range in color from green to brown, the blue bullfrog can only shift its skin color along the spectrum from a brownish purple to a bright blue. Thus, the deep indigo. When I learn this, I feel a sudden pang of embarrassment for the blue bullfrog — he doesn’t even know he’s turning the wrong color!

As we return to the ranch house, Chad and two other Fish and Wildlife Service staffers arrive. A quick Google search revealed to me that while there are many businesses with the name “Blue Bullfrog,” there are very few of the frogs themselves. Chad confirms this, saying that the genetic mutation that causes the frog’s blueness only occurs in about one in a million frogs. He adds that because the bright blue color makes frogs with the mutation much more susceptible to predators, very few survive past the tadpole stage, lowering the odds of actually finding a blue bullfrog even further. The last reported sighting of a blue bullfrog was in Downer’s Grove in Illinois, but the frog was seen only once by volunteers before it disappeared.

So why catch such a wonderfully unusual creature? “Protective custody,” Chad answers. There are a myriad of tragedies that could befall the frog in the wild. When I ask Chad what animals would prey on the frog, he immediately says, “Anything.” If they manage to catch it, Chad says, the frog will be kept in the regional Fish and Wildlife Service office until it finds its ultimate home — probably in a research lab, where researchers will probe the frog’s DNA to find the genetic source of the mutation. As the sun sets, the researchers rise from the kitchen table and prepare for the odd hunt. They’ve chosen to try and catch the frog at night, because they will be able to shine flashlights across the tank and identify it by its fluorescent eyes. The chances of catching a single frog in a giant pond are slim, but Chad and his crew didn’t drive from the regional office for nothing. Frog-catching equipment in hand, they head for the pond.

It takes more than an hour for their truck to roll back into the driveway of the ranch house. As they get out of the car, I’m expecting to hear a story of defeat, but by some miracle, Chad emerges carrying a big white cooler. He cracks the white Styrofoam lid and reaches in, bringing out a bull frog so giant it takes both of his hands to keep it from jumping all over the kitchen. As we excitedly peer at the miraculous specimen under the fluorescent lights, the frog changes from a dark, grayish green to a beautiful aqua. At the same time, it slowly ceases its struggle. As it stretches out serenely in Chad’s hands, the giant blue bullfrog peers lazily out of its amphibian eyes, as if he’s wondering what the big fuss is about.