Ducks name quarterback, Toussaints status yet to be determined 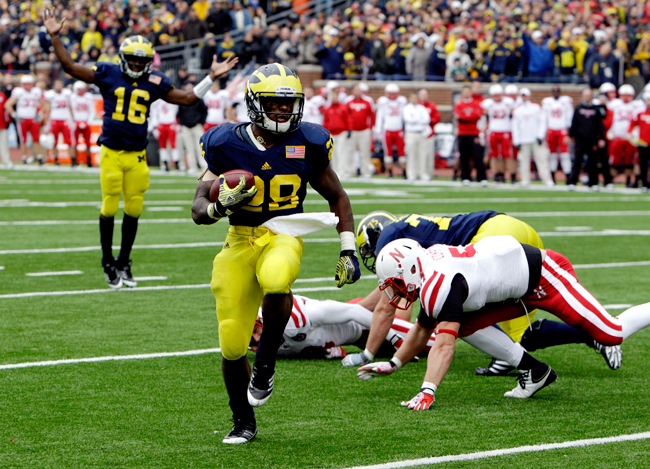 Michigan running back Fitzgerald Toussaint (28) scores a touchdown against Nebraska in Ann Arbor, Mich. Toussaint is scheduled to face a DUI charge, but coach Brady Hoke has yet to make a decision on whether or not he will play against Alabama.

Opening weekend of the 2012 college football season won’t contain a dull moment. With a multitude of intriguing matchups, many teams have make-or-break opportunities that we will be talking about well into January. Let’s look at some national notes heading into the weekend:

Oregon redshirt freshman quarterback Marcus Mariota has been handed the starting job in Eugene. Mariota replaces Darron Thomas, who opted to forgo his senior season for the NFL.

Notre Dame star running back Cierre Wood has been suspended for the first two games of the season for a violation of team rules. Wood rushed for 1,102 yards and nine touchdowns last season. Wood becomes the fourth Notre Dame player suspended for at least one game this season, which includes quarterback Tommy Rees.

Former Tennessee receiver Da’Rick Rogers opted to transfer to Tennessee Tech after being indefinitely suspended this past week from the Tennessee program. Rogers caught 67 balls for 1,040 yards and 9 touchdowns last season. With Rogers, Tennessee was slated to have one of the top receiving corps in the country.

Projected Michigan starting running back Fitzgerald Toussaint’s status remains uncertain for Saturday versus Alabama. Toussaint was pulled over for drunk driving in July and pleaded to a lesser DUI Tuesday. Head coach Brady Hoke has yet to make a decision on whether the junior running back will be allowed to play or not. Toussaint rushed for 1,041 yard and 9 touchdowns in 2011. In more uplifting news for the Wolverines, senior Roy Roundtree has been cleared to play Saturday after undergoing arthroscopic knee surgery on August 10. Michigan will undoubtedly need every offensive weapon facing the staunch Crimson Tide defense.

The 2011 BCS Title game Offensive MVP, Auburn running back Michael Dyer, will be attending Arkansas Baptist College this fall and will not play football. After being suspended from Auburn, Dyer followed his offensive coordinator Gus Malzahn who took the head-coaching job at Arkansas State. However Dyer ran into some legal trouble in July and was not readmitted to the program.

LSU’s leading rusher in 2011, Michael Ford, is facing potential academic suspension prior to Saturday’s opener versus North Texas. Ford rushed for 756 yards and seven touchdowns in 2011.

Missouri running back Henry Josey won’t play in 2012. Josey tore his ACL, MCL, and patellar tendon versus Texas last season. Josey had 1,168 rushing yards in just ten games before his injury in 2011. Josey, a junior, is expected to make a full recovery. Boise State has tagged junior quarterback Joe Southwick as its starter for the post-Kellen Moore era. Southwick has backed up Moore the past two seasons, and will be tested early as the Broncos visit No. 13 Michigan State, who bolsters one of the nation’s top defenses.