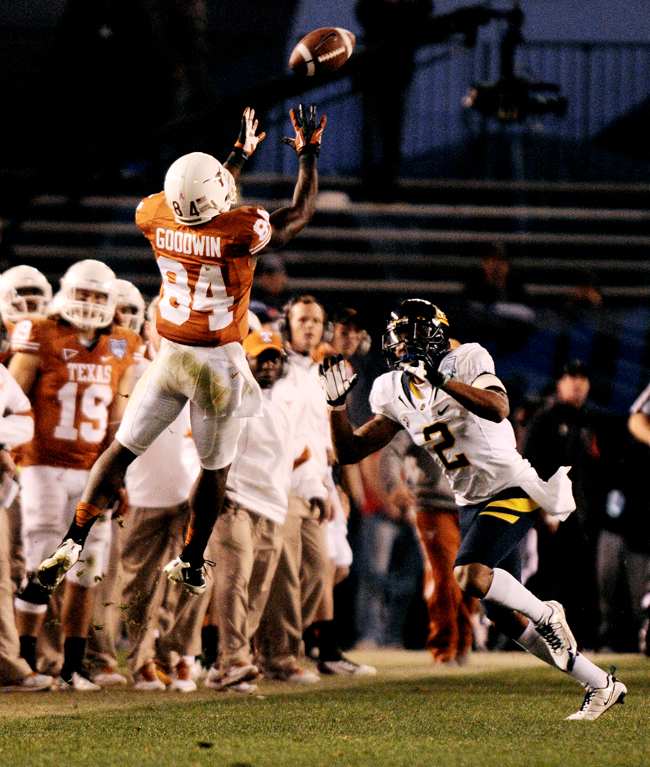 Marquise Goodwin (84)anticipates a pass during the 2011 Holiday Bowl. He would finish the game with three receptions for 49 yards and one touchdown. Be

The Olympic athlete’s journey is a tough one.

Big league baseball players get 162 games a year, NBA players get 82 and an NFL regular season includes 16 games. An Olympian gets once chance every four years to show the world what they’re made of, to see if their 48 months’ worth of dedication and sacrifice has paid off.

Fortunately for Marquise Goodwin, he has football.

After becoming the first American since 1960 to win an NCAA championship in the long jump and come out on top in the U.S. Olympic Trials in the same event, Goodwin placed 10th in London. His personal best jump of 8.33 meters (27 feet, 4.25 inches), the distance he leaped in Oregon less than six weeks earlier, would have earned him gold if he matched it at the 2012 Olympics.

“Football is a huge stress reliever,” Goodwin said. “The transition, it is just great to be able to come back and not have to worry about if I would’ve done this or that. My mind is totally on football now.”

Goodwin is now in fall camp, preparing for this upcoming season and the Longhorns’ season opener against Wyoming Sept. 1. It will be the first season opener he’ll play in two years as he missed Texas’ win over Rice last year while trying to qualify for this summer’s Olympics in South Korea’s World Championships.

“There can’t be a better two-sport athlete in football and track & field in America than Marquise Goodwin,” Longhorns head coach Mack Brown said in a statement. “We’re so excited to have Marquise back. Here’s a guy who won the last two USA titles and two NCAA Championships in the long jump. He’s a guy who competed in the Olympics and had a chance to win a gold, he was our most valuable player in the bowl game last year and he’s always on the honor roll.”

Goodwin rejoined the Longhorns for their 17-16 win over BYU last year. As a junior, he caught 33 passes for 421 yards and four touchdowns, peaking toward the end of the season, catching five passes for 129 yards and a touchdown in a loss to Baylor in the regular season finale and making three grabs for 49 yards and a score in the Holiday Bowl triumph over Cal in December.

Unlike last year, Goodwin won’t be adjusting to a new offense or flying thousands of miles into Austin in the middle of the year.

“It was great to have him back,” junior cornerback Carrington Byndom said. “We all saw his performance, but it is good to have him back out there. We are going to need him.”

Now that Goodwin’s made the transition from the thrill of his first Olympic experience to the grind of getting ready of his final year with the Longhorns, he’s poised for a solid senior season. The leader of a young receiving corps, no Texas pass-catcher stretches the field better than the blazing-fast Goodwin.

“Words can’t even explain how it is to represent your country, having the words USA written across your chest,” Goodwin said. “But it is great to be back at football, to see my teammates and coaches. I am just glad to be back.”

Goodwin went on to describe his Olympic performance as the most crushing performance of his promising athletic career. He would not reveal his intentions for a possible pursuit of redemption at the 2016 Olympics in Brazil. If he does go for gold in Rio, thankfully, for his sake, he’s got football to keep him busy in the meantime.