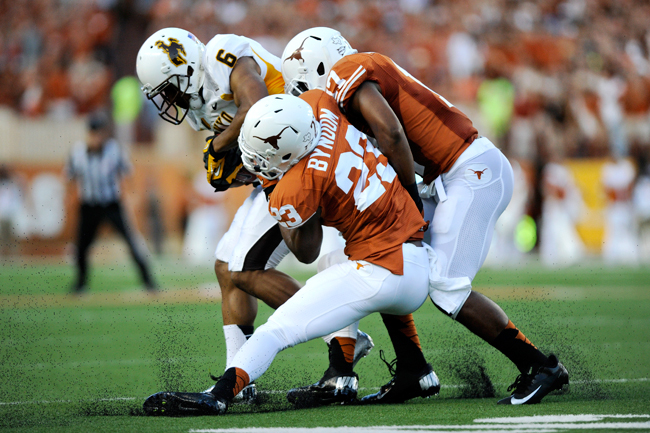 Junior cornerback Carrington Byndom and Adrian Phillips attempt to bring down Wyoming wide out in Saturday's victory. Byndom and the rest of the secondary had a tough game allowing 276 yards through the air.

Texas allowed Wyoming only one third-down conversion in 11 tries, but that one stood out like a sore thumb.

“When you give up an 80-yard pass, you can’t say your secondary played well,” Longhorns head coach Mack Brown said.

Brett Smith dropped back on third-and-6 and hit Robert Herron for one of his five catches near the first-down marker. Carrington Byndom and Adrian Phillips — two stalwarts of what is expected to be one of the nation’s best secondaries — collided while trying to bring Herron down.

Instead, Herron got the first down and a lot more.

“It’s my fault,” Byndom said. “I should have made the tackle. I’m not going to put the blame on [Phillips]. We just have to put the guy on the ground.”

He went 82 yards into the end zone and gave Wyoming a 9-7 lead that it would hold onto until Texas scored 24 unanswered points and put the game out of reach. Herron went on to catch another long touchdown pass from Smith, but the pieces of an elite defense were on display in the Longhorns’ 37-17 season-opening win over the Cowboys.

Senior safety Kenny Vaccaro made an athletic, leaping interception in the second quarter, and senior defensive end Alex Okafor forced Smith into making a weak toss into traffic that Byndom picked off to end Wyoming’s next possession.

“We did get good pressure on [Smith],” junior defensive end Jackson Jeffcoat said. “We got in his face and made him throw interceptions. He gave us two, which set our offense up to score. That’s 14 points right there.”

After not recording a sack in Texas’ first three games last season, Okafor gave the Longhorns, who racked up 16 quarterback hurries, their only sack of the day. But like many of his teammates on defense, he conceded that Texas’ defense has much to improve.

“I thought there were some bright points, like when we got a couple turnovers in a short amount of time,” Okafor said.

“That’s when we’re at our best. Then we had some low points when we gave up big plays.”

Okafor, however, does expect more out of the Longhorns’ defense.

“I’m not going to lie to you. We want to be the No. 1 defense in the nation,” he said. “We showed that we could be a dominant defense.”

It’s only the first game of the year, and the Longhorns have several weeks between now and when they face a team with a chance of beating them. Armed with a talented and deep defense that doesn’t allow many sustained drives, it’s paramount that Texas limits the big plays it allows. At the moment, that’s what is keeping its defense from being able to lay a legitimate claim to being considered the country’s best.

“I’m not sure how many missed tackles we had, but it was too many,” Jeffcoat said. “We’re going to be home again, so it should be exciting and it should be a different story.”

Printed on Tuesday, September 4, 2012 as: Defense isn't best in nation…quite yet