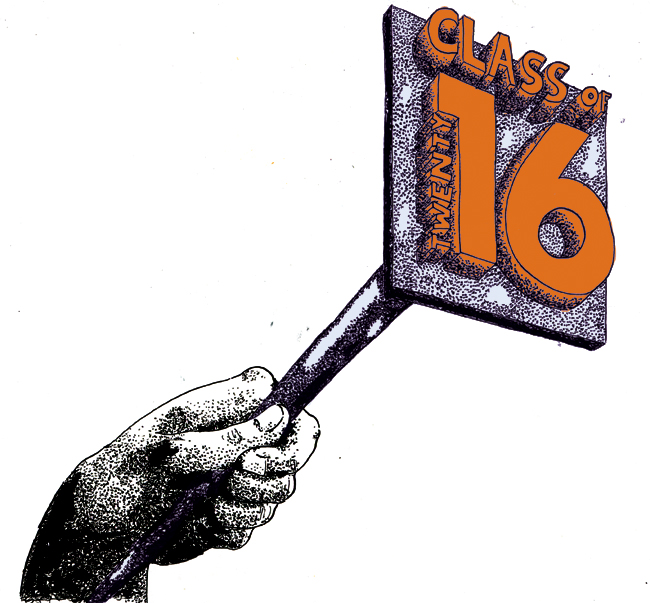 2016 is everywhere. It is on the shirts. It is on the bags UT gave students at orientation. It has become a hash tag on Twitter. It was in UT President William Powers Jr.’s speech at Gone to Texas. It was even on the UT Tower for a few hours last Wednesday night.

It’s no longer only a graduation date; 2016 has become a brand, continuously reminding students when their four years are up. The logo the University has slapped onto college shirts and orientation bags reads “Class of Twenty 16” and is enclosed with an orange box.

“Part of the reason and the goal with this branding is not just to have that logo visible as much as possible but to also get students to buy into meeting their expectations and their potential,” said Kyle Clark, associate director of New Student Services. “We want as many of them as possible to graduate together.”

Clark said ‘branding’ this incoming class is part of the overall effort to increase four-year graduation rates. For the University, 2016 is not just a brand; it is also a deadline.

As part of the most recent effort to increase its four-year graduation rates, the University has also implemented changes to its orientation program and appointed David Laude to senior vice provost for enrollment and graduation management. UT called Laude in this new position the University’s “Graduation Rate Champion.”

Clark said the design for the 2016 bags and T-shirts given to freshmen originally came from the Cockrell School of Engineering, and it has since spread throughout the entire campus.

Esmer Bedia, senior coordinator of New Student Services, said the brand has even spread to many different forms of communication.

“I have seen it on flyers, brochures and any type of communication that has been sent out to students,” Bedia said. “I also feel like everyone on campus is saying they’re excited to welcome the class of 2016.”

Ladan Ghannadpour, a radio-television-film freshman, said she had noticed the use of 2016 everywhere, but she was not aware it was a new branding effort.

“I thought all of this was a normal thing that they did with the classes before us,” Ghannadpour said. “I knew the University was trying to increase its four-year graduation rates, but I had no idea the branding of 2016 had to do with that.”

Ghannadpour said she thinks these efforts might have an impact. She is starting her first year with 31 hours of college credit she earned during high school, so she said she feels like she will graduate on time.

John Murphy, an advertising professor, said the University’s branding efforts are marketing the concept of a four-year graduation.

“The putting of 2016 on packets of materials and the president using that specifically in remarks is branding this group, and it is marketing to them,” Murphy said. “But what I thought first when I heard about this was setting up expectations, and the expectation is on-time graduation.”

Murphy said there was no subliminal messaging occurring in this situation.

“People misuse that term,” Murphy said. “Subliminal advertising or subliminal messaging is about communicating with someone below their level of consciousness and influencing their behavior without them realizing a message has been delivered.”

While Clark, Bedia and Murphy all said the branding will help the effort to increase four-year graduation rates, Murphy said the University still needs to consider other factors.

“There is a bonding with the institution that occurs,” Murphy said. “So as opposed to Riverside and Far West, we wanted them to be right here on campus in the shadow of the Tower.”

This year, 5,167 freshmen are living on campus, which is 65 percent of the 8,000 first-year students. Murphy said as many freshman students as possible need to live on campus.