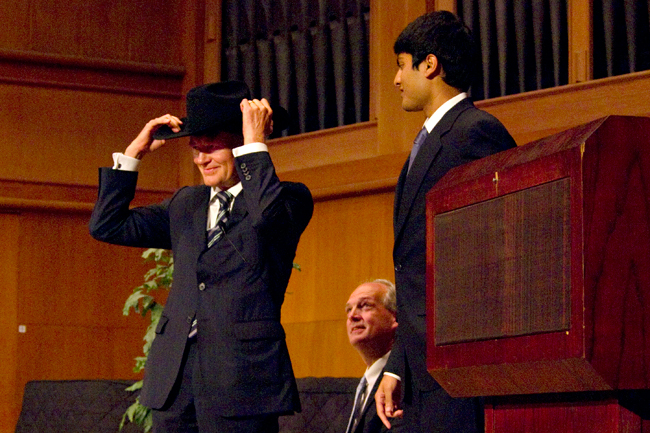 The McCombs School of Business presents Ellis Armstrong, CFO of Exploration and Broduction for BP, with an honary Stetson Hat following his apperance at Wednesdays VIP Speaker Session.

Donning a black Stetson cowboy hat presented to him by the Undergraduate Business Council and holding up a Hook ‘Em Horns sign, BP executive Ellis Armstrong concluded his discussion chronicling his journey up the corporate ladder as part of the McCombs VIP Distinguished Speaker Series.

Armstrong, Chief Financial Officer of Exploration and Production at BP, participated in a discussion Wednesday evening with David Platt, associate dean for undergraduate programs at the McCombs School of Business, followed by a Q-and-A session where he offered advice on everything from family life to natural gas price speculation. The Undergraduate Business Council organized the event as part of the McCombs VIP Distinguished Speaker Series. The event was free to all UT students.

As he recounted his professional successes and mistakes, Armstrong drew on his personal experiences to offer advice to college students.

“The thing I would have told myself in college is don’t get too stressed about making the right choice because some people know all their life they want to do a certain thing,” Armstrong said. “At least in my life, I didn’t know, so the thing I would have told myself is give yourself the most options and pick one that you are going to like doing.”

BP, a name that has become inextricably and infamously linked with the Deepwater Horizon explosion that resulted in nearly five millions barrels of oil leaking into the Gulf of Mexico, has worked to correct the damage since the spill in April 2010, Armstrong said.

“Obviously the events of 2010 in the Gulf of Mexico were a tragic accident and everybody wishes it did not happen. But the thing that is interesting though, is that the response to that accident did actually, in a deep way, reveal the values of the company,” Armstrong said.

“BP is a company that has a strong presence at UT, both in the business school and outside,” Shah said. “We know how many students are recruited by BP and we know how big of a role they play in energy throughout the world.”

Business freshman, Liam Woolley-MacMath, said being able to see and hear from Armstrong and the other speakers the series brings to campus is extremely beneficial to undergraduate students.

“That’s basically all of our dream jobs,” Wooley-MacMath said. “Just to see somebody in that position is kind of inspiring.”