Hawaii is a breeding ground for Texas liberos 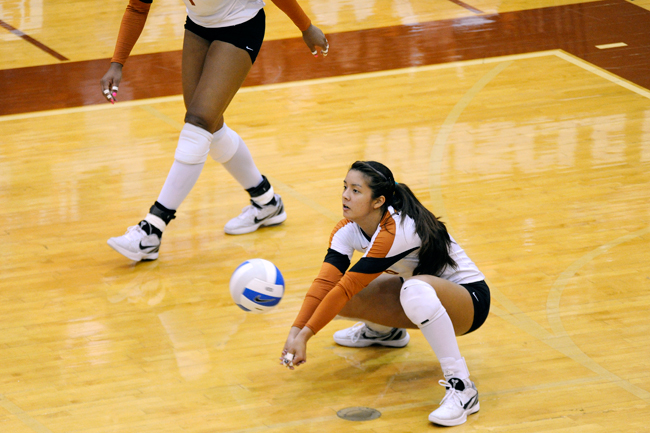 Senior starting Libero Sarah Palmer against UTSA in 2011. Palmer comes to Texas from Hawaii and is joined by former club teammate Kat Brooks, a freshman libero also from the Aloha State

People often ask Kat Brooks if she can “hang ten.”

The freshman libero, who hails from Honolulu, Hawaii, is quick to dismiss the surfer stereotype.

“I get asked if I surf all the time, and I’m kind of bad at it,” Brooks admits. “I’ve gotten really weird questions like, ‘Do you live in a grass hut? Is there electricity?’”

Brooks praised her native state as a “great place to grow up” but said she’s always had Texas in the back of her mind.

“The Hawaii connection was a big thing,” Brooks said. “Knowing Sarah loved it here really made me willing to try it out. I felt really comfortable coming here.”

Brooks made her collegiate debut in a 3-0 sweep of LSU, notching 13 digs, the most of any player in the match.

“My first game was amazing,” Brooks said. “It was the best experience running out onto the court and seeing the stadium packed full of fans. It was a dream come true.”

“Even from the first day of preseason, she’s shown us that she can be on the court and make some contributions,” Rockwell said. “It’s been a breath of fresh air to have someone that young say, ‘I can do this, I can compete.’”

Head coach Jerritt Elliott said Brooks has quickly established herself as an important member of the team.

“You wouldn’t notice that she’s a freshman,” he said. “She just comes in here and she plays. She’s adjusting great.”

Two years earlier, Palmer made the decision to leave her home in Kailua, Hawaii to join the Longhorns.

Despite having to adjust to the heat and the sheer size of UT, Palmer said she wanted something different from home.

“I came from a small private school, so switching to a bigger campus was an adjustment,” Palmer said. “I wanted to go farther from home, because I didn’t want to be dependent on my parents. I wanted to have a more independent lifestyle.”

Palmer was starting libero for 21 matches last season and 22 matches as a freshman. Though she left the sand and surf of home behind, Palmer said the experience at Texas has helped her grow both on and off the court.

“We’ve always had ups and downs but overall, it’s been a really great experience,” she said. “I’m learning a lot of stuff on the court and in school, learning how to manage my time with such a busy schedule.”

A national championship title, Palmer said, is a consistent year-to-year goal for the team.

“We’re always looking for a national championship — anything lower than that is a disappointment,” Palmer said. “This team is working really hard to get to our goal of that in the gym and in school, trying to be at our best.”

Palmer is also taking on the informal role of a mentor for her young teammate Brooks, though she said Brooks is perfectly capable on her own.

“It’s really fun to play with Kat,” Palmer said. “Back home I was an outside hitter so we had different roles and now we’re in the same role. It’s just nice having a friendly face around and having that chemistry. Here and there she’ll ask me questions, but she has a high volleyball IQ, so she kind of learns on her own.”

Brooks said she enjoys playing with a familiar teammate and having Palmer there to rely on while miles and miles from their original volleyball club in Hawaii.

“We played club together for three years, so we’re really comfortable with each other on the court,” Brooks said. “She has helped me a lot with my positioning on the court and learning the different defensive systems, so it’s really awesome playing with her.”

The Texas appeal, Elliot said, extends beyond volleyball, but the familiarity of having a teammate from the same area has helped the girls adjust.

“They come from a really solid background of volleyball, so it’s kind of been a pipeline,” Elliot said. “They just love it here — I think it’s such a nice change of pace for them. We see them smiling and enjoying themselves.”

They’re sure to make plenty of waves of their own on the court this season.