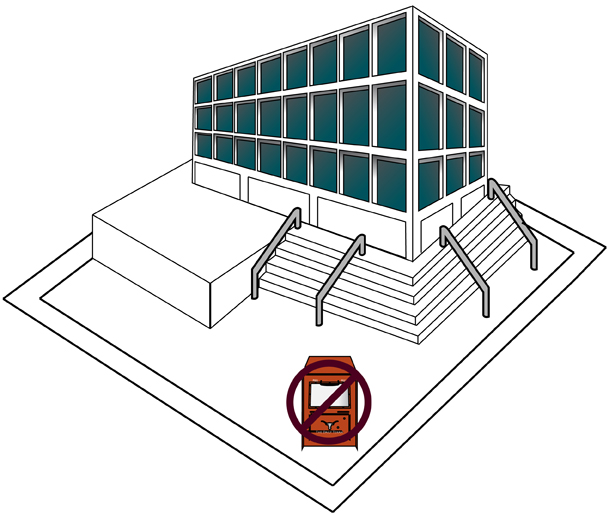 As the Belo Center for New Media works to gear students up for the new digital age of journalism, some faculty and students are concerned it is leaving the print age behind.

Citing environmental concerns, College of Communication administrators have stopped The Daily Texan from placing a news box in front of the $54.8 million Belo Center for New Media. Janice Daman, assistant dean of the College of Communication, told the School of Journalism last week that no news boxes are allowed in the Belo plaza or on the sidewalk. Since opening in August, the University’s newest building has housed the School of Journalism and the departments of advertising and public relations.

Mark Morrison, adjunct lecturer in the School of Journalism and a Texas Student Media board member, said he was disappointed and wants a Texan news box in front of the center.

“I think it is outrageous,” Morrison said. “We should make it as easy as possible for our students and faculty to get access to the Texan. The Belo Center is, after all, the home of the journalism school.”

The issue arose when Glenn Frankel, director of the school of journalism, asked journalism professor Wanda Cash to look into why there were no Texan boxes in front of the Belo Center for New Media. Daman informed Cash of the college’s policy regarding news boxes in an e-mail.

Daman said the building is environmentally friendly, and the presence of news boxes raises concerns that litter, clutter and debris could gather around the building.

The Belo Center for New Media is striving to achieve the “silver certification” from U.S. Green Building Council’s Leadership in Energy and Environmental Design. Signage, banners, plaques and other forms of paper have also been banned from being posted outside the building.

“It’s not a news box issue, per se,” Daman said in an e-mail to The Daily Texan. “That is important to understand.”

In her e-mail to Cash, Daman said the project team rejected a number of requests for material to be posted in front of the building in order to maintain “the look of the plaza.”

“You’ll notice that even the trash cans’ color was specifically chosen by the architect,” Daman said in her e-mail to Cash.

Daman also said there are Texan boxes nearby, one across Whitis Street at the Kinsolving Residence Hall and another across Dean Keaton Street.

Morrison said faculty and students at the Belo Center for New Media should not have to cross the street to pick up a copy of the Texan.

Frankel, director of the school of journalism, said he thinks it is a mistake not to put news boxes in front of the Belo Center for New Media.

“This is the School of Journalism and the College of Communication, and newspapers remain one of the fundamental platforms and vehicles of journalism,” Frankel said. “I would like our students to be exposed to journalism and all of its manifestations here — and that includes newspapers.”

A former editor-in-chief of the Texan from 1969 to 1970, Morrison said he did not face similar issues during his time as editor, but problems with placing news boxes outside of buildings have become more common recently. Last semester, the College of Communication did not let The Daily Texan place news boxes in front of the CMA building in the Walter Cronkite Plaza.

“I mean, to think that the Walter Cronkite Plaza does not have a Daily Texan newsstand, Walter would be rolling over in his grave,” Morrison said.

Cronkite, an icon in the industry of broadcast journalism, got his start at the Texan.

Susannah Jacob, editor-in-chief of the Texan, said she was disappointed there are no newsstands in front of the Belo Center.

“We make every effort with every issue to stop any confusion between The Daily Texan and trash,” Jacob said.

The Daily Texan, UT’s official student newspaper, has roughly 75 news boxes on campus and 100 off campus. The Texan also has about 175 off-campus distribution locations where business owners receive bundles of the Texan and then offer free copies to their customers.

The UT System’s policy on solicitation allow the individual universities to decide where news racks or news boxes can be located. While UT-Austin does not have a specific policy or rule, a spokesperson for Facilities Services said UT does not allow the location of boxes and stands to interfere with foot and vehicle traffic or building access.

Printed on Thursday, September 6th, 2012 as: No Texan news boxes available outside Belo