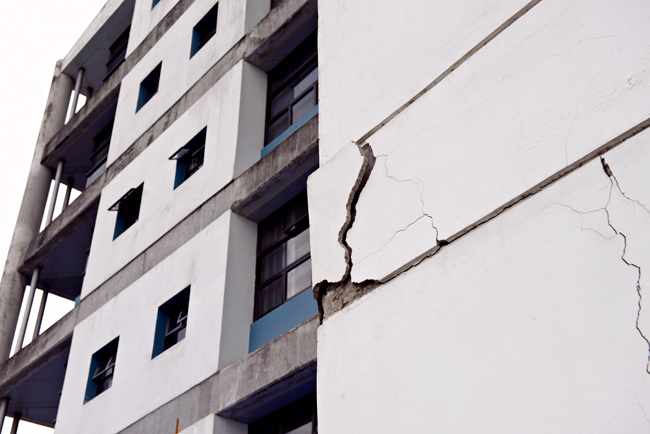 A wall at the University of Costa Ricas school of electrical engineering is damaged after an earthquake in San Jose, Costa Rica, Wednesday, Sept. 5, 2012.

“When we felt the earthquake, we held onto each other because we kept falling,” said Rosa Pichardo, 45, who was walking on the beach in the town of Samara with her family when the quake hit.

“I’ve never felt anything like this. We just couldn’t stay standing. My feet gave out under me. It was terrible, terrible,” she said.

Officials said the quake collapsed some houses and at least one bridge and caused landslides that blocked highways. Costa Rica President Laura Chinchilla said there were no reports of major damage and called for calm.

Residents described being shocked by the force of the quake, which was felt as far away as Panama and Nicaragua and was the biggest since a 7.6-magnitude quake in 1991 left 47 people dead.

Michelle Landwer, owner of the Belvedere Hotel in Samara, north of the epicenter, said she was having breakfast with about 10 people when the quake hit.

“The whole building was moving, I couldn’t even walk,” Landwer said. “Everything was falling, like glasses and everything.” Still, she added, “Here in my building there was no real damage.”

The quake was somewhat deep — 25 miles (41 kilometers) below the surface. Quakes that occur deeper underground tend to be less damaging, but more widely felt.

“If it was a shallower event, it would be a significantly higher hazard,” said seismologist Daniel McNamara of the U.S. Geological Survey.

The U.S. Geological Survey said the quake was centered about 38 miles (60 kilometers) from the town of Liberia and 87 miles (140 kilometers) west of the capital, San Jose. The magnitude initially was estimated at 7.9, but was quickly downgraded to 7.6.

The quake was followed by two strong aftershocks of magnitudes 4.5 and 4.4.

Officials initially warned of a possible tsunami, and Samara local police supervisor Jose Angel Gomez said about 5,000 people — 80 percent of the town’s population — had been evacuated from coastal towns in and near the quake’s epicenter. By midday they were allowed to return.

In San Juan, frightened residents ran into the streets, and cell phone and Internet service failed across the city. Some neighborhoods lost electricity.

At the hospitals of Nicoya and Liberia, in Guanacaste, hundreds of people packed emergency rooms asking to be treated for shock and minor injuries.

One death was confirmed, a man who died of a heart attack caused by fright, said Carlos Miranda, a Red Cross worker in the city of Liberia.

In the last four decades, the region has been rocked by 30 earthquakes of magnitude-6 and larger. Two exceeded magnitude-7 — in 1978 and 1990 — but did not cause any deaths.

The last deadly quake to strike Costa Rica was in 2009, when 40 people died in a magnitude-6.1 temblor.