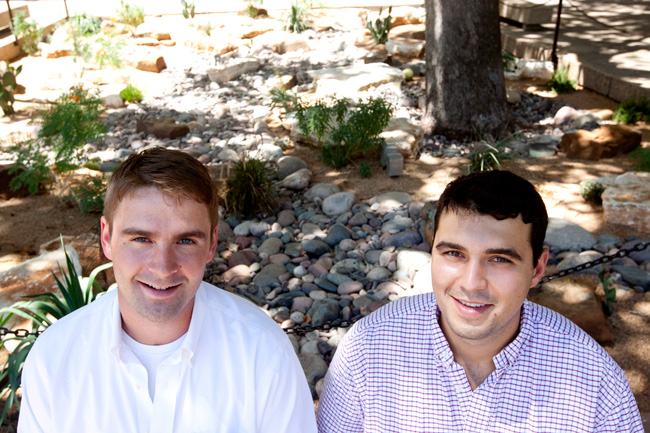 Environmental science majors Tim Eischen and Hank Star are the minds behind the xeriscaping project at the Harry Ransom Center.

While UT is saving 233,000 gallons of water annually by using rock gardens and drought-tolerant plants, landscapers in the facilities department are looking to save even more.

UT’s Campus Planning & Facilities Management is looking to expand xeriscaping on campus. The University has been xeriscaping, which is a landscaping practice that saves water by replacing different landscape plots across campus with more drought-tolerant plants, since 2009. Two rock gardens at the Harry Ransom Center, which are saving 72,000 gallons of water annually, are the newest efforts made to conserve water on campus. Officials said they are hoping to xeriscape a third plot at the Harry Ransom Center if they get approval from UT.

Brett Gustafson, a landscape installation supervisor, said the previous landscape was costing the University a lot of water.

“When we came in here, we ripped out all the existing plant materials that were just water suckers,” Gustafson said.

Environmental science seniors Hank Star and Tim Eischen pushed for the project along with one other student. They proposed a landscape makeover to the Ransom Center’s Green Fee Committee, an on-campus committee that reviews green-project proposals and awards funds.

“It took a long time, dealing with everyone that wanted to be involved, and it finally happened,” Star said. “But this is what we are moving towards, more drought-tolerant and climate-tolerant landscapes.”

Gustafson said these rock gardens and drought-tolerant plants don’t require watering on the University’s part once they get planted and settled.

Xeriscaping is part of a greater UT effort to save water across campus. The University installed a central irrigation system across the campus last semester, which has the ability to automatically turn itself off when the areas do not need water because of rain. The system also automatically alerts Facilities Services and Landscape Services when there is a leak on campus.