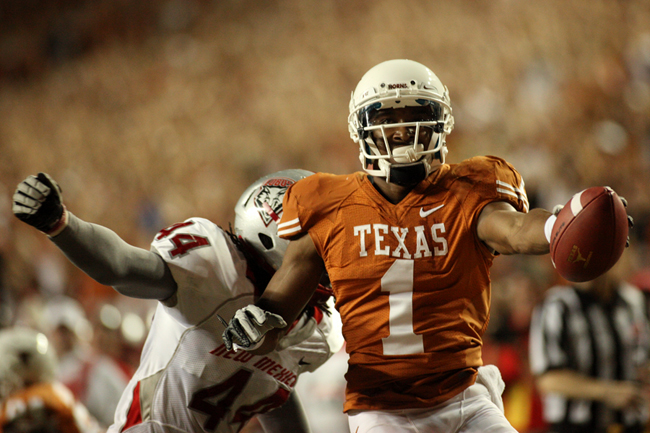 Mike Davis scores a touchdown at the end of the first half against New Mexico. The Longhorns lead 17-0 at the half.

David Ash and the offense had been hoping to improve the passing game and capitalize on big plays. There were some missed opportunities, but the Longhorns did just that in their 45-0 win over New Mexico.

Ash had two passing touchdowns, the first a 22-yard pass to Mike Davis at the end of the first half. Then, he took advantage of freshman Daje Johnson’s legs with a short shovel pass that Johnson took to the end zone with a 45-yard run. Suspended for a violation of team rules last week, Johnson scored on just his third career touch.

The offense’s goal to increase the number of explosive, long plays became apparent the first time the ball touched David Ash’s hands. He sent a long pass downfield to Mike Davis, but he was unable to catch it.

“We just have to go back to practice hopefully hit that in the next game," Davis said. "I wanted it bad though.”

Later in the first half, Ash misfired to a wide open Marquise Goodwin on 2nd-and-7 that would have given the Longhorns a first down deep in New Mexico territory. Instead, the Longhorns were forced to kick a 45-yard field goal that Nick Jordan missed wide left. Jordan made a 38-yard field goal earlier in the game and he is currently 2-for-5. Texas sealed the win with a 13-yard touchdown pass from Case McCoy to M.J. McFarland.

“I thought we made more [explosive plays],” Ash said. “But I think I still missed some opportunities.”

Ash went 16-for-22 in the game. But the Lobos’ triple option offense ate the clock up and the Longhorns had the ball only four possessions over 10:10 in the first half. The Longhorns came alive in the second half and scored 28 points.

“I think in the first half we did some good things,” co-offensive coordinator Bryan Harsin said. “We made some adjustments in the second half.”

Though passing was a key part in the offense, the backs were not quiet as Texas had 146 rushing yards.
With 5:10 left in the third quarter, Joe Bergeron ran the ball in for a 1-yard touchdown.

For the second week in a row, D.J. Monroe scored a touchdown off the Wild formation. Freshman Johnathan Gray, who had 30 rushing yards in the game, handed the ball off to Monroe.

“We knew we were going to win the game,” said head coach Mack Brown. “We know we can run the ball, we were trying to get more balance.”

After giving up plays of 29 yard and 16 yards in New Mexico’s first possession, the defense seemed to figure out the Lobos’ triple option offense and blanked New Mexico, giving Texas its first shutout since a 43-0 win over Kansas last season.