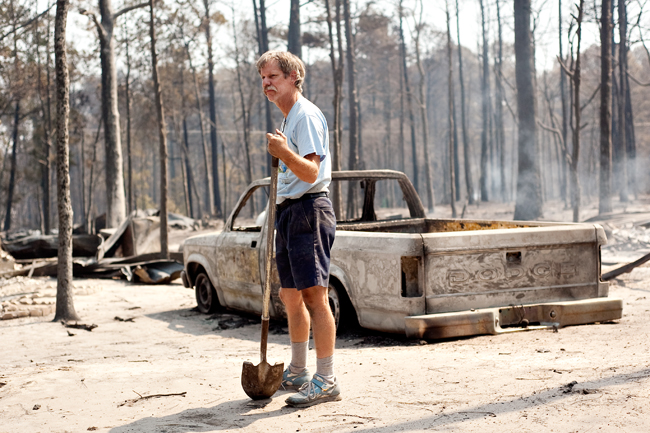 Paul Sandberg stands on the remains of the more than 30-year-old house that he built outside the city of Bastrop Tuesday morning. Although the Bastrop county fires remained classified as uncontained during the morning, many residents were anxious to return to their neighborhoods and evaluate the damage.

Bastrop residents who have spent the last year collecting the ashes from the Labor Day wildfires will share their stories over the radio waves in a public forum hosted by KUT.

KUT News Director Emily Donahue said the KUT news team has worked for months collecting oral histories of the fires and their effects and will broadcast a public forum, titled “Forged in Flames,” from the KUT studio Monday from 6 to 7 p.m. in the newly constructed Belo Center for New Media.

The forum will feature audio stories and live interviews with victims of the fires.

Donahue said the fires will have continuing impacts on the area’s economy, its environment and the people who live there.

She said the station recognized the magnitude of the fires’ impact and decided to devote a full year to developing this broadcast.

KUT has already collected 100 hours of audio and hopes to continue collecting people’s stories. “We realized early on that this story was going to be important to the community as a whole for years to come: financially, environmentally and personally,” Donahue said.

The Labor Day wildfires were not only some of the worst in Texas history, but some were even “characterized as the eighth worst in terms of home and acres burned in the U.S.,” Donahue said.

Bastrop Mayor Terry Orr said the city received a wealth of attention from the media during this time of tragedy because of its once breathtaking Bastrop State Park, a now blackened testament of its former image.

Orr said the victims lost a lot more than their homes in the fire.

When KUT informed him it planned to host a memorial forum, Orr said he was overwhelmed with gratitude.

Spicewood, still in the process of developing commercially, experienced 6,500 acres of fire damage and lost 66 homes.

Karen Lacy, secretary of the Spicewood Long Term Recovery Committee, said Bastrop was fortunate enough to have an emergency exit strategy to cushion as much of the blow of these fires as possible.

Lacy said Spicewood was not as prepared.

Lacy said she is proud of her neighbors for jumping to action within hours of the fire.

“You have to have a volunteer heart to work through this. We didn’t have anything ready like Bastrop did,” Lacy said.

“If you just stop and think about what you would do if you lost everything, those thoughts don’t just go away.”