Getting to know the man behind the PCL voice 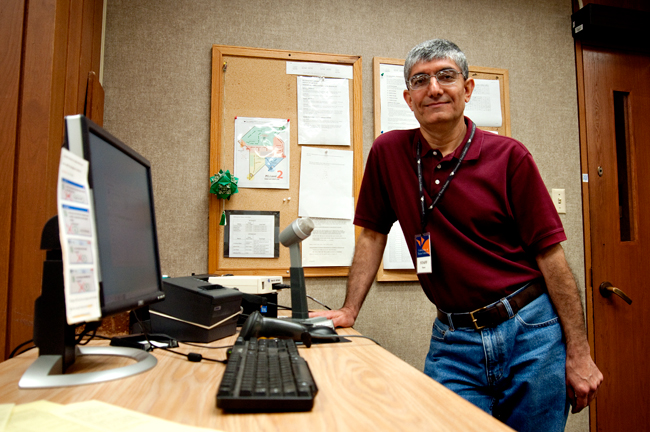 Sasan Rezaie, the man behind the voice of the Perry-Casteñeda Library, was born and raised in Iran before obtaining his mathematics degree at UT.

Sasan Rezaie may be an unfamiliar name to many, but Rezaie has literally become the voice of the Perry-Casteñeda Library. “The checkout desk will close at 11:45 p.m.” Yes, Rezaie is that guy. However, do not be fooled by his grave demeanor. In person, Rezaie is one of the kindest individuals one could ever meet.

Hidden behind small-framed glasses, Rezaie’s eyes are steady and attentive. At the mention of his UT celebrity status, his smile widens in both disbelief and flattery. And regardless of his “salt-and-pepper” hair, Rezaie has a youthful vigor that only adds to his charming persona.

Born and raised in Iran, Rezaie and his family relocated to San Antonio during his adolescence. Rezaie would later attend Texas State University for the basics before obtaining his mathematics degree at UT. “I had Texas A&M as one choice and UT-Austin as another,” Rezaie said in the Information and Research Help area of the PCL. “Somebody kept telling me so many Aggie jokes that I decided on Austin. Plus, Austin had sent their letter of acceptance before A&M did.”

Rezaie moved to Austin in 1980 — he became a work-study student the following year, attending class during the day and working at the undergraduate library (now the FAC) at night. “I started at the UGL in September of 1981,” Rezaie said. “I just enjoyed working there so much that I stayed and worked at the same place until we were transferred to the PCL.”

Rezaie has since become one of the PCL’s library assistants, making announcements and helping take care of the building. Rezaie has seen UT change significantly since his arrival in the early ‘80s. He reminisced about when he could park right outside the PCL when Fred Akers was head coach of the Longhorns football team and when cars drove freely through campus. His eyes lit up: “On Sept. 10, I will have been here for 32 years.” The epiphany hits him hard and he begins to laugh, pointing at his salt-and-pepper hair.

Granted, he has had some bad experiences. His voice becomes solemn as he remembers a student who visited him regularly but died in the early 1990s. He has also witnessed some wild moments. During one of his midnight shifts at the PCL, Rezaie saw a group of students streaking at the library entrance.

He has also seen how important he is to the UT community. When another announcer replaced Rezaie toward the end of last semester, some students created a Facebook page hoping to bring him back. There were students who even went to the library to inquire Rezaie’s whereabouts, only to realize that Rezaie never left the PCL — he was just taking a break from announcing. “I had a lot of complaints once the voice changed for a few days,” Rezaie said. “They would come in [to the PCL] and ask what happened to the old voice, and when they realized it was me, they would ask when I would be returning.”

Realizing that PCL patrons anticipated his scheduled announcements, Rezaie would inevitably reclaim his announcer throne. “After studying for a while, hearing his voice is entertaining,” junior Helen Tau said. “When you hear his voice, you instantly become happy.”

When Rezaie is not at the PCL, he likes to indulge in Persian and Chinese cuisine. “Alborz Persian Cuisine and First Chinese BBQ are restaurants I enjoy,” Rezaie said. He also likes playing chess and reading novels by author and U.S. talk radio host Clark Howard.

However, Rezaie’s free time will be cut short when the PCL starts operating 24 hours a day, five days a week in October. Although Rezaie will no longer be able to say, “The library will close at 2 a.m.,” he still plans on making his famous announcements. “Once we become 24 hours, I’ll have to say, ‘The library will remain open continuously,’ or something like that,” Rezaie said. “The change does not bother me, and I think the students will like it.”

As for the future, Rezaie would like to retire someday and volunteer at organizations such as Meals On Wheels and the Capital Area Food Bank of Texas. “I know there are a lot of people in need,” Rezaie says. “So I would like to volunteer some of my time and help out.”

Until then, Rezaie will continue to do what he does best: Reaching out to students through his announcements and providing his services for any and all who enter the PCL. “He’s been with the library since I was in middle school and has always been unbelievably reliable,” said PCL circulation desk manager and supervisor Margaret Alvarado. “He’s an absolute rock.”