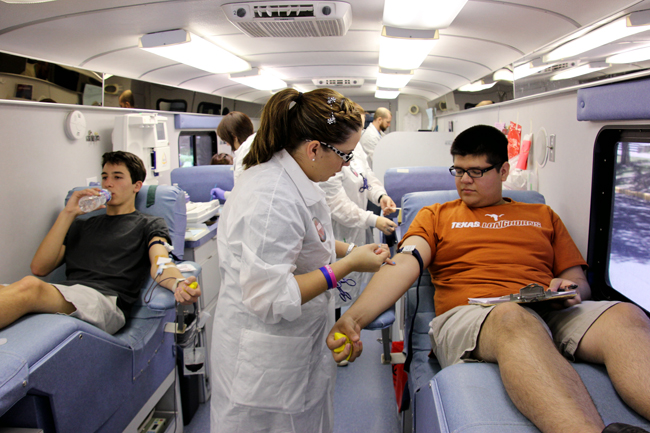 In an attempt to give back to the public and spread a peaceful image of Islam, the Ahmadiyya Muslim Student Organization held a blood drive Monday on the eve of the 11th anniversary of 9/11.

The organization invited students to donate blood on campus and learn about the organization’s efforts to correct stereotypes about the Muslim community. The blood drive took place on Speedway near the McCombs School of Business and Gregory Gymnasium. The organization has been hosting blood drives since last year in an attempt to honor 9/11 victims by giving blood to save lives.

Ahmadiyya Muslim Student Organization President Usama Malik said this campaign is a peaceful and intellectual way to spread the message of Islam.

“Muslims for Life is a campaign that was started by the Ahmadiyya Muslim Community USA last year on the 10th anniversary of the tragic Sept. 11 attacks,” Malik said. “This campaign was founded with the objective of promoting the true, peaceful message of Islam, condemning terrorism and saving lives.”

Since its inception in 1889, the Ahmadiyya Muslim Community has expanded across the United States, with student and non-student organizations located from Orlando, Fla., to Seattle, Wash. Its 1-year-old Muslims for Life campaign has encouraged its local chapters, including the one here at UT, to hold blood drives.

With the Ahmadiyya Muslim Student Organization collecting 28 pints of blood and receiving help from 33 volunteers in the last drive, Malik said he and his fellow club members feel confident that the drive helps spread their message.

Andrea Lloyd, marketing manager of The Blood Center of Central Texas, which helped coordinate the event, said the blood center is enthusiastic about any time it can partner with student organizations that help their community.

“We are supportive of their desire to give back to the community in the form of blood donation,” Lloyd said.

After giving blood Monday, economics junior Julie Weltman said she agrees with the organization’s goals and motivations for hosting the blood drive.

For those who haven’t attended, the next drive is set for next Monday, Sept. 17 from noon to 5 p.m. at the same location.