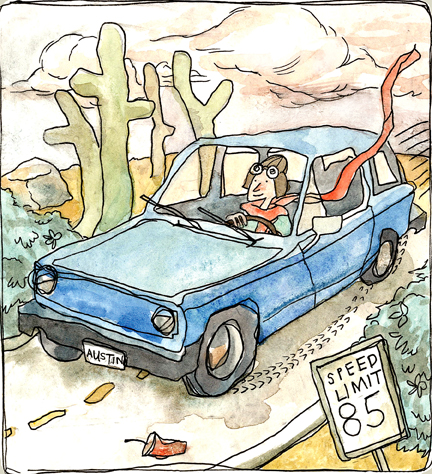 If they are willing to pay, drivers will be able to travel to San Antonio on a stretch of highway with the highest speed limit in the nation starting Nov. 11.

The Texas Transportation Commission recently approved an 85 mph speed limit for a 41-mile stretch of State Highway 130, a toll road now under construction that will connect Austin and San Antonio. Work to mitigate congestion on Interstate 35 has been underway for years, Veronica Beyer, Texas Department of Transportation spokesperson, said.

“Safety is our top priority and tests have shown that the designated speed is a safe one,” Beyer said.

She said an engineer performed a speed test on the road and determined the 85 mph speed limit to be appropriate. The highway was designed to handle speeds in excess of 80 mph, Beyer said.

“Fifteen years ago, I-35 was a fairly reliable route,” Lippincott said. “I-35 between Austin and San Antonio has gone from reliable to unreliable to reliably congested.”

SH 130 Concession Company has invested more than $1.3 billion in the development and maintenance of this road, Lippincott said. This money bought his company the rights to a portion of the toll road’s profits for the next 50 years. He said 12 miles of what is now Highway 183 will be tolled, but the rest is new construction. Lippincott anticipates students traveling back and forth from home will take full advantage of the road, noting that many centers of higher education fall in the I-35 corridor.

“Budget-conscious students may not always make that decision, but on those high-traffic weekends, like Thanksgiving, it may be a good option,” Lippincott said.

Applied learning and development sophomore Vivian Ngo-Anh said she takes I-35 to San Antonio at least a couple of times a month to visit her boyfriend. She said she plans to take advantage of the toll road and its speed limit.

“It really would be worth it, since there are less people usually on toll roads,” Ngo-Anh said. “The purpose is to make it more time-efficient.”

She said she would be happy to pay if it meant shaving time off her drive. In Houston, where Ngo-Ahn is from, she said she is used to taking toll roads to get around.

“It is a lot more convenient,” Ngo-Anh said. “It definitely speeds things up.”