Before and after: Sweatt and Fisher 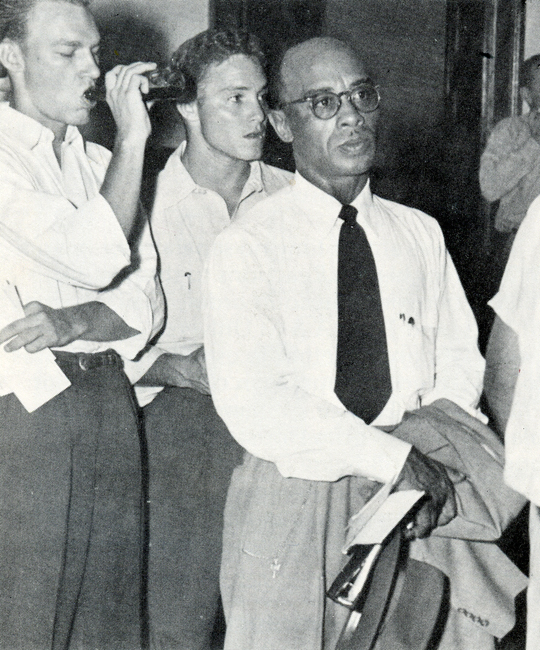 Editor’s Note: Heman Marion Sweatt II is the nephew of Heman Sweatt, the first African American to attend UT Law School. Sweatt won the right to enroll after he filed a civil rights case against the University of Texas. In 1950, the U.S. Supreme Court ruled in Sweatt’s favor. Last month, Sweatt’s nephew, along with other family members, submitted an amicus brief in support of UT-Austin in its defense against the case brought by Abigail Fisher, a white woman denied admission in 2008. Fisher has alleged UT violated her constitutional rights by considering the race of applicants who weren’t admitted automatically through the Top Ten Percent Law. The case will be heard by the Supreme Court Oct. 10. In the Q&A below, Sweatt’s nephew talks about the Fisher case, race relations at UT, where he was a student, and alleged attempts to bribe his uncle not to pursue his history-making discrimination case against UT.

DT: What do you want UT students to know about your uncle?
HS: All the trials and tribulations he had to go through entering UT and attending UT. Because there have been over 50 years since my uncle’s case, a lot of young people don’t believe racism is alive and well, when it’s happening every day. By not knowing what’s taken place in the past, young people can’t recognize some things presented to them in today’s time. Hopefully, someday, we will come to a point when we won’t have to think about race, but today’s young people have grown up in times when things are not as blatant as they were in the past. Even when I was enrolled at UT in 1968, some things were different, some things were better in comparison to 1950, when my uncle got in, but there were still a lot of things to move toward and overcome. Be aware that everything is not rectified, everything is not in the past. That doesn’t only go for minority students, but white students, brown students, black students — we have to know our history and maintain a sense of what we’re trying to achieve going forward.

DT: What were your own experiences as a UT undergraduate like?
HS: I was in culture shock. Even though I had been in some educational programs that were integrated, such as the original pilot of [the U.S. Dept. of Education’s Upper Bound program], I still was limited in my contact with students of other races. I knew the people that had participated in Upper Bound, and became good friends [with] them, but when I arrived at UT in 1968, I was on the campus for a couple weeks, [and] outside of the other minority students I came from Dallas with, I didn’t see a single black person walking on the campus. That in itself was a culture shock. Back in 1968, enrollment at UT was 40,000, and less than 300 black students attended the school. It took some getting used to.

DT: In the Fisher case one argument in favor of UT’s current admissions policy is ensuring a minority student doesn’t feel like a “token” representative. What does it feel like to be a token representative, and why is it important a student doesn’t feel that way?
HS: The way I can address that is by saying at the time I felt I had to prove that, yes, I deserve to be here. My skin color doesn’t mean I’m dumb or ignorant, and I have knowledge. When you find yourself in a minority, whether it’s being black in a group of whites for the first time or white in a group of blacks, there are subconscious feelings associated with the experience, not only related to proving yourself, but making sure you are not fulfilling any stereotypes other group members may have about you.

DT: In the brief, you along with your family members quote [former U.S. Supreme Court Justice] Tom Clark’s bench memo in the Sweatt case steering the other justices away from counting bricks and books to consider what cannot be quantified—what do you mean and why is that important?
HS: Justice Clark spoke to the other justices stating that prestige, dynamics and support could not be conferred by separate but equal facilities. If you count books and bricks only, you don’t get the intangibles that the primary institution has. The openness of the dialogue, the exposure and the prestige still matter today just as yhey mattered in that decision back in 1950. Why else would so many students want to attend the University of Texas?

DT: How did the Sweatt opinion introduce the idea that race was a compelling component of higher education? Why do you think diversity is a compelling thing for a university to achieve?
HS: There is still a perception that the University of Texas is basically a white institution. That perception exists among some whites and some blacks. But by trying to provide diversity, the university has helped to overcome the notion that this big institution [UT] is for one group only.

DT: Do you see the outcome of the Fisher case as fundamentally influential in African American’s relationship to Texas and public education and if yes, how so?
HS: Yes, for a university as prestigious as UT, I think it would matter a great deal for education in the state of Texas. But it goes beyond Texas; this case could have a rippling effect on universities throughout the nation. This could also have a rippling effect in the employment and workforce. It will be a step backwards if [the Supreme Court] moves in favor of Fisher.

DT: Do you believe, as former [U.S. Supreme Court] Justice O’Connor wrote, that the need for race considerations will expire eventually?
HS: I hope so.

DT: Anything else you’d like to add?
HS: Before my uncle passed away, I had as an adult an opportunity to visit him and sit down and talk in depth. That made a great impression on me We spoke about some of the things he had to go through while trying to get into the University of Texas. He told me how people tried to buy him off to go somewhere else with large sums of money, and how the people in the city of Austin reached out to him and lent him support.