Griffin a smart start for fantasy 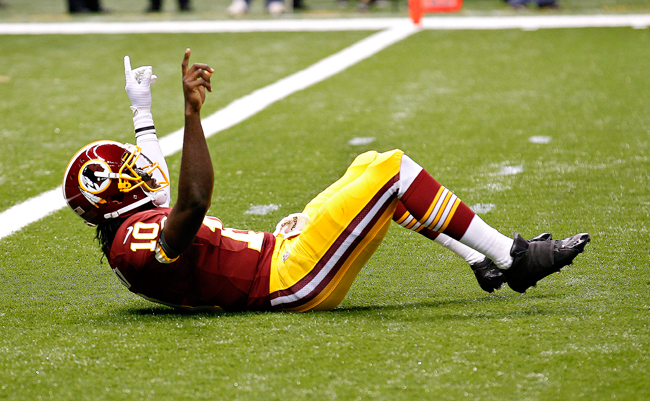 There were big surprises in Week 1, both good and bad. For most fantasy players, that means Week 1 in the Fantasy Football world was pretty rough. How will these surprises affect week 2?

Here’s who to start:

RG3’s NFL debut came at the Superdome against Drew Brees and the New Orleans Saints, making his performance even more impressive. He completed 19 of 26 passes for 320 yards while running for 42 yards more. Griffin III showed his poise, tallying two touchdowns in the game, one for 88 yards.

Spiller had 14 attempts running for 169 yards and one touchdown. He averaged 12.5 yards a carry while catching a few passes out of the backfield. That isn’t too bad since he ran against a decent New York Jets defense. With Fred Jackson out, Spiller should match his sterling performance when he faces the Kansas City Chiefs, who gave up 40 points in their first game.

Ridley had the best game of his career in the Patriots’ opener, running 21 times for 125 yards. This season, after gaining the starting job with the loss of Green-Ellis, Ridley’s explosive speed and willingness to absorb contact will rack up a lot of points for any fantasy team.

Here’s who to sit:

Sanchez faced a weak Buffalo defense in the Jets’ opener, throwing for three touchdowns, but he still has Tim Tebow right behind him. After Tebow came in as a slot receiver on the second play of the game, Sanchez seemed bothered and is facing a Steelers defense in Week 2 that is coming off a Week 1 loss to the Broncos. His first performance was a bit misleading, and may set some fantasy players up for failure in future weeks.

While Smith had a good opener, he shouldn’t have the same luck this week. Smith had a total of 62 yards with 4.8 yards a carry. That was against a St. Louis run defense that was ranked 31st in the league at the end of last season. This week Smith and the Lions face a 49ers defense that is very strong against the running game.

Weeden got stuck under the American flag being brought onto the field during warm-ups. If he knew what was to come, he probably would have stayed there. He threw for only 118 yards with no touchdowns and four interceptions. With a tough schedule coming up for the Browns against the Cincinnati Bengals, Baltimore Ravens and New York Giants, things won’t get any easier for Weeden.

Printed on Thursday, September 13th, 2012 as: Griffin III a smart start for fantasy