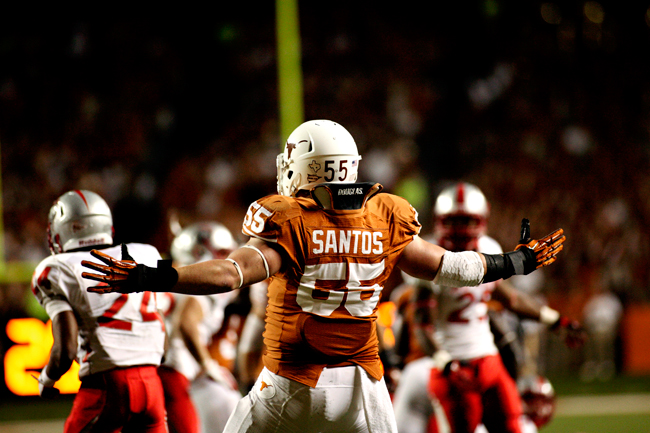 During the Longhorns’ game last Saturday, Dalton Santos saw something he had never seen before.

As he was running towards a player about to tackle him, they made eye contact and Santos saw him say beneath his helmet, “Oh no.”

What other reaction would you expect from someone who is about to be hit by someone the Longhorns’ players call “the crazy white boy”?

Though he isn’t sure if that descriptor his teammates gave him is true, Santos has started embracing it.

“I guess it was from starting at a young age, playing pee-wee football,” Santos said. “My dad was always like that. It was just that mentality of being the nastiest dude you can be out there.”

Santos, a freshman linebacker from Van, Texas, has made an impact on special teams already even though he has only played two games. He has posted a team-high four special teams tackles so far this season.

But, his stats don’t say everything about him. Those hits have been hard hits. Really hard hits.

Whenever kicker Nick Rose kicks the ball downfield, a switch goes off in Santos’ mind and he doesn’t think anymore. He just runs and does whatever he has to do to stop the ball.

“Every play you have to have that intention to come and just try to blow people up,” Santos said.

Santos weighs 260 pounds and runs a 4.5-second 40-yard dash. His power, speed and spirit have helped him become a leader for the special teams even though he is just a freshman. Both teammates Tevin Jackson and Kendall Thompson agreed Santos has had the hardest hits so far on special teams.

Thompson said if Santos was running towards him, he would “get ready.”

“Every time he runs down there my eyes are constantly on him,” junior linebacker Jordan Hicks said. “He’s full of energy, you see him run down there and nobody wants to block him. And when they do try he just absorbs it and keeps going.”

Being either the first members of the team on the field or starting the next series, the unit has taken it upon themselves to get the defense excited and ready to play. They plan on setting the tone from the first play of the game.
Santos aims to one day be the middle linebacker for the Longhorns. But, he understands that every career takes time and he will play whatever position the coaches want him to play.

He’s definitely made the most out of his role on special teams so far this season. He and the other kickoff coverage squad are proud of their accomplishments so far but they plan to continue to improve.

“I might not be playing as much … but the role I play is making an impact on them guys,” Santos said. “It’s getting them guys ready to go out there and say, ‘Santos just laid a hit on kickoff. Let’s go out there and let’s just punish people.’’

Santos and the other members of the kickoff team call themselves the “Wild Bunch.” For a guy they call “crazy,” he certainly fits in.