Texas fans get taste of SEC in Oxford 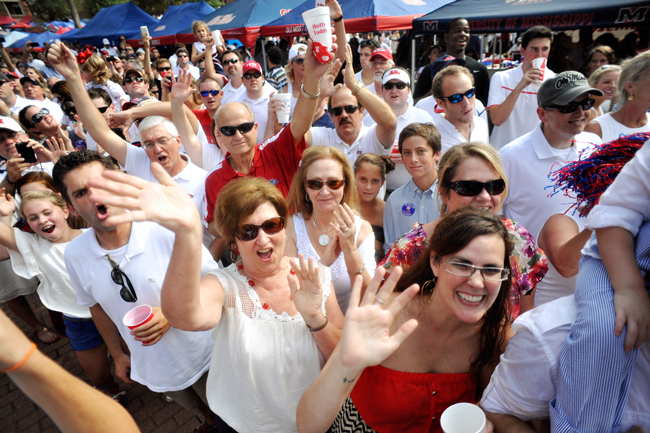 Ole Miss fans celebrate game day in Oxford. The Grove provides an atmosphere like no other in college football with The Walk of Champions and the Hotty Toddy chant.

Saturday’s matchup between Ole Miss and Texas pits the SEC against the Big 12 in ESPN’s College Football Finale. However, for the thousands of Longhorn fans making their way to Oxford, Miss. this weekend, there may be more buzz around the tailgating scene than the game itself.

The Grove at Ole Miss is known nationwide for the tailgating atmosphere that makes Oxford truly one of the greatest experiences in all of college football.

Longhorn fans can expect to see tents sitting one beside the other and a large array of spreads as far as the eye can see. Chandeliers will hang from tents with tables covered with tablecloths, while thousands of fans dressed in red hold the drink of their choice. The late kickoff on Saturday will give Texas fans in Oxford plenty of time to spend in the Grove and walk around a campus that was voted the most beautiful campus in the country by Newsweek in 2011.

As kickoff gets closer, fans can turn their attention toward the Walk of Champions — a traditional walk the football team makes through the Grove on their way to the stadium roughly two hours before game time. It’s a sight that must be seen on game day in Oxford.

When game time arrives, Longhorn fans should make their way toward Vaught-Hemingway Stadium for the matchup Texas and Ole Miss fans everywhere have been waiting for.

Be sure to be locked in and focused about 15 minutes before the game begins to ensure you don’t miss the Rebels’ traditional “Hotty Toddy” chant. By this point, Texas fans will probably be tired of hearing the chant, but when a celebrity asks the question, “Are you ready?” the sea of red packed closely inside the stadium will join in unison to yell the chant.

At that point, it’ll be game time and the atmosphere should be electric, and everyone will finally get to see what they’ve been waiting for: football.

The game has the potential to be a thriller if Rebel head coach Hugh Freeze can design some plays to cut into the Texas defense. On the other side of the ball, the Ole Miss defensive line will see where it really stands going against a huge Longhorn offensive line and big running backs Joe Bergeron and Malcolm Brown.

It should be an epic showdown Saturday in Oxford, and one that Texas fans making the trip will remember for a lifetime.