The realism of Emily Wolfe sets her apart from others 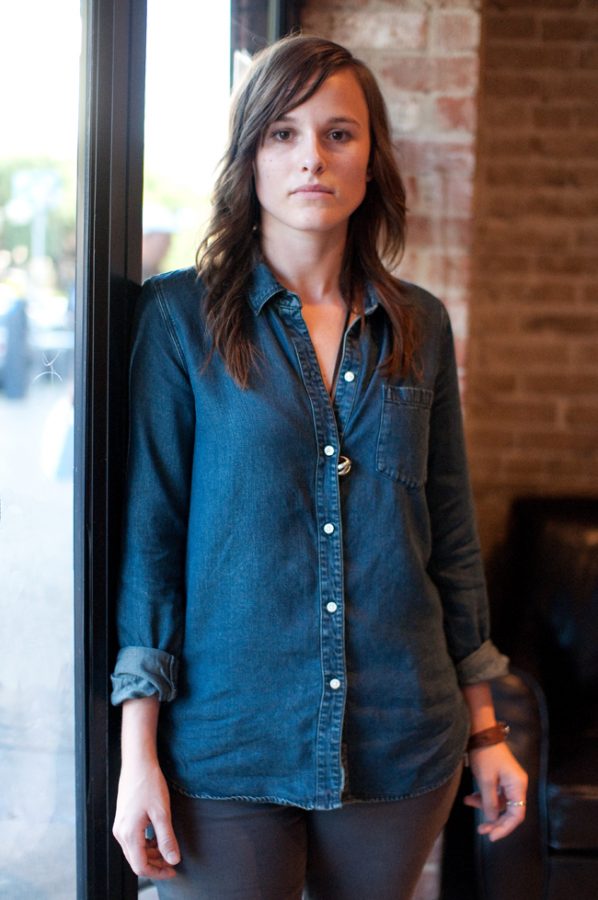 Austin singer and songwriter Emily Wolfe graduated from St. Edwards University last May and has since been pursuing her music career. Wolfe will be performing her debut album Directors Notes at Stubbs Bar-B-Q this Sunday.

Emily Wolfe transcends the ranks of ordinary musicians. Already the charming innocence and genuineness that are all her own are apparent as she confesses that this is her very first time inside Caffe Medici. Wolfe graduated from St. Edward’s University last May and has lived in Austin for more than 10 years. It seems there are many places she has yet to explore and conquer, but her profound maturity and grace make up for any lack of experience the 22-year-old singer-songwriter possesses at this point in her budding career.

Wolfe has graduated from strumming out Eagles’ hit “Tequila Sunrise” on a battered, pawn shop guitar for her parents in her self-described “super suburbia” home, to filling venues across Austin with self-written songs about everything from heartache to family to strange and inspiring dreams. Austin Community College professor Tim Dittmar agrees.

“Emily’s music definitely stood out. I immediately knew there was something special about her,” Dittmar said. “She doesn’t have an ego, she’s not pretentious and, above all, she has a natural talent.”

During a summer audio engineering course at ACC, Wolfe approached Dittmar with a homemade CD of songs and asked if he could help her record what turned out to be her debut album, “Director’s Notes.”

“Emily knew what she was doing throughout the entire recording process. She’s very mature for her age, and she has a very natural voice that makes you believe a lot,” Dittmar said. “She is very real and honest.”

‘Real’ seems to be a theme that radiates through Wolfe’s personality and music, which is a rarity in an industry that breeds more celebrities than actual musicians. She partially attributes this to the cornucopia of classic rock and Motown hits she grew up listening to with her parents.

“I think older music just seemed really real back then,” Wolfe said. “The songs move people in a way that’s kind of transcendent, and that’s the kind of music I want to make.”

When it comes to her album, however, real is somewhat of an understatement. With a track list of songs all drawn from Wolfe’s personal experiences, “Director’s Notes” is about as close to her personal diary as listeners can get.

“There were times when I felt like I couldn’t direct my own life, or like someone else was doing it for me, so all of the songs are notes of things that were going on in my life at the time,” Wolfe said.

Wolfe’s goal is for listeners to be able to relate to her songs in their own ways. This makes for a very personal concert experience, a fact to which friend and bandmate, Hannah Hagar, can attest.

“As a performer, I think Emily is relatable on-stage, and that allows the audience to really connect not only with the music but with her as well,” Hagar said.

This intimate connection is established by the way Wolfe gives everything she has to each show, providing the audience with a raw glimpse into a life that isn’t very much unlike their own. For Wolfe, relatability is key.

“I feel like that’s the goal of a live performance: to feel like you’re in your room and nobody’s watching you. You’re just putting out an emotion and it’s like, ‘Here’s what I feel, connect with it or not, but I feel that,’” Wolfe said.

Wolfe’s chilling honesty and her natural ease of character, both sparkling rarities in such a cutthroat business, have successfully charmed those around her and are now being used to charm audiences in Austin and several cities around the state. Wolfe isn’t wasting any time, and she’s already hinting at having plans for her sophomore album.

As her tour circuit grows bigger, so will the venues, fan base and already-high expectations for an artist that is quickly claiming her place in the promised land that is the Austin music scene.

Wolfe will be playing at Stubb’s Bar-B-Q Sunday as the opening act for Lauren Mann and the Fairly Odd Folk.