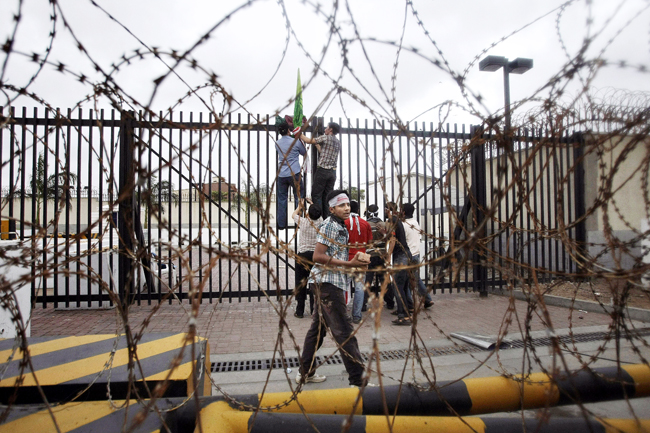 A Pakistani protester holds a stone as others hang a flag at the entry of the U.S. consulate during a demonstration in Karachi Pakistan on Sunday. Hundreds of Pakistanis protesting clashed with police while thousands of others held peaceful demonstrations.

KARACHI, Pakistan — Hundreds of Pakistanis protesting an anti-Islam film broke through a barricade near the U.S. Consulate in the southern city of Karachi on Sunday, sparking clashes with police in which one demonstrator was killed and more than a dozen injured.

In a move that could escalate tensions around the Arab world, the leader of the Hezbollah militant group called for protests against the movie, saying protesters should not only ‘express our anger’ at U.S. embassies but urge leaders to act.

The film, which denigrates Islam’s Prophet Muhammad, has sparked violent protests in many Muslim countries in recent days, including one in Libya in which the U.S. ambassador was killed. The U.S. has responded by deploying additional military forces to increase security in certain hotspots.

In a televised speech, Hezbollah leader Sheik Hassan Nasrallah said the U.S. must be held accountable for the film, which was produced in the United States. The U.S. government has condemned the film.

“The ones who should be held accountable and boycotted are those who support and protect the producers, namely the U.S. administration,” Nasrallah said. He called for protests on Monday, Wednesday, Friday, Saturday and Sunday.

He urged protesters to call on their leaders to express their anger too.

“We should not only express our anger at an American embassy here or there. We should tell our rulers in the Arab and Muslim world that it is ‘your responsibility in the first place’ and since you officially represent the governments and states of the Muslim world you should impose on the United States, Europe and the whole world that our prophet, our Quran and our holy places and honor of our Prophet be respected,” he told his followers in a televised speech.

Nasrallah said he waited to speak out about the film until Sunday, when Pope Benedict XVI ended his three-day trip to Lebanon.

In Pakistan, police fired tear gas and water cannons at the protesters in Karachi after they broke through the barricade and reached the outer wall of the U.S. Consulate, police officer Mohammad Ranjha said. The protesters threw stones and bricks, prompting the police to beat back the crowd with their batons. The police and private security guards outside the consulate also fired in the air to disperse the crowd.

One protester was killed during the clash, said Ali Ahmar, spokesman for the Shiite Muslim group that organized the rally.

An official with the main ambulance service in the city, Khurram Ahmad, confirmed they carried away one dead protester and 18 others who were injured.

All Americans who work at the consulate, which is located in the heart of Karachi, were safe, Rian Harris, a spokeswoman for the U.S. Embassy in Islamabad, said.

Thousands more held peaceful demonstrations against the film in other parts of the country, including the eastern city of Lahore and the northwest city of Dera Ismail Khan.

The demonstration in Lahore was organized by Jamaat-ud-Dawa, believed to be a front organization for a powerful militant group blamed for attacks in the Indian city of Mumbai in 2008 that killed over 160 people. The protesters shouted anti-U.S. slogans and burned an American flag.

“Our war will continue until America is destroyed!” shouted some of the protesters. “Dog, dog, America is a dog!” chanted others.

The head of Jamaat-ud-Dawa, Hafiz Mohammad Saeed, who has a $10 million U.S. bounty on his head, addressed the crowd and demanded the Pakistani government shut down the U.S. Embassy and all consulates in the country until the filmmakers are punished.

The protests were set off by a low-budget, crudely produced film called “Innocence of Muslims,” which portrays Muhammad as a fraud, a womanizer and a child molester.

A 14-minute excerpt of the film, which is both in English and dubbed into Arabic, has been available on YouTube, although . Some countries have cut access to the site.

The violence began Tuesday when mainly Islamist protesters climbed the U.S. Embassy walls in the Egyptian capital of Cairo and tore down the American flag from a pole in the courtyard.

Chris Stevens, the U.S. ambassador to Libya, also was killed Tuesday along with three other Americans, as violent protesters stormed the consulate in Benghazi. President Barack Obama has vowed that the attackers would be brought to justice but also stressed that the U.S. respects religious freedom.

The intensity of the anti-American fervor initially caught U.S. leaders by surprise, but in the last several days the Obama administration has called for calm and urged foreign governments to protect American interests in their countries.

“I think that we have to continue to be very vigilant because I suspect that … these demonstrations are likely to continue over the next few days, if not longer,” U.S. Defense Secretary Leon Panetta told reporters Sunday.

It has been unclear how much of the violence was spontaneously triggered by the film and how much of it was spurred on by anti-American militants using it as a tool to grow and enrage the crowds.

Libya’s Interim President Mohammed el-Megarif said Sunday that the attackers who killed the U.S. ambassador in the country appeared to have spent months preparing and carefully choosing their date — the anniversary of the Sept. 11 terrorist attacks. He pointed to a second raid on a safe house. “All this indicates clearly that the attackers are well trained and well prepared and have planned this in advance,” he said in an interview.

But the U.S. ambassador to the United Nations, Susan Rice, brushed aside his assessment, saying evidence gathered so far indicated it was a spontaneous reaction to the anti-Islam video and not a premeditated or coordinated strike.

“It seems to have been hijacked, let us say, by some individual clusters of extremists who came with heavier weapons,” said Rice, referring to the mortars and rocket-propelled grenades used in the attack.

Whether the attackers had ties to al-Qaida or other terrorist groups has yet to be determined, U.S. ambassador Susan Rice said, noting that the FBI has yet to complete its investigation.

It wouldn’t be the first time that Western works critical of Islam have triggered spontaneous unrest throughout the Middle East, she said, pointing to the novel “Satanic Verses” by British author Salman Rushdie and the cartoons of the Prophet Muhammad published by a Danish newspaper in 2006.

A semiofficial religious foundation in Iran increased a reward it had offered for killing Rushdie to $3.3 million from $2.8 million, a hard-line Iranian newspaper reported Sunday, a move that appeared to be linked to the protests against the video.

Printed on Monday, September 17, 2012 as: Protests over prophet film continue