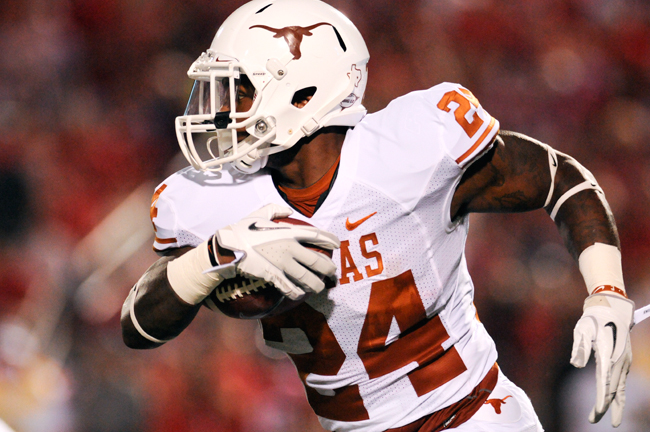 Sophomore running back Joe Bergeron has rushed for 207 yards and three touchdowns through three games, and is the Longhorns' second leading rusher. However, Bergeron left Saturday's game with a shoulder injury and will be limited in practice this week.

Although it may be an odd sight, don’t be surprised if you see running back Joe Bergeron rollerblading around campus one day.

He admits he’s “different,” but that comes with the position, Bergeron said.

“Running backs always have a weird personality that sets them apart from everybody else on the team," he said.

Like former Longhorn running back Fozzy Whittaker, Bergeron has taken a liking to exotic animals.

He currently owns a 4-foot-6-inch California king snake named Roxanne and feeds her two mice a week. His old snake wasn’t growing fast enough, so he upgraded and purchased Roxanne from an exotic-pet store. Whittaker used to own rabbits, a ferret, turtles and a pet catfish. Although Bergeron hasn’t acquired the small zoo that Whittaker had, he enjoys having a distinct pet.

Whether it’s the colored socks he always wears, his huge pet snake or his skills on rollerblades, Bergeron’s personality is pretty quirky. Although he’s a funny guy, his humor doesn’t seem so apparent on the field. Just ask all the defensive lines that he pounds through each week.

“He’s got great personality, especially for that position, and when it’s time to go, he can flip the switch and I really like that about him,” co-offensive coordinator Bryan Harsin said.

Bergeron accumulated 110 yards and two touchdowns during the Longhorns’ first game of the season and has continued to be an important presence on the Longhorns’ stacked backfield.

Bergeron suffered a shoulder injury during the Longhorns’ matchup against Ole Miss Saturday and left during the second half. He will be limited in practices this week, but there’s no doubt that he will work through this injury with a smile on his face.

“He likes to laugh,” running back Malcolm Brown said. “He’s a silly guy. He loosens everybody up in the group. It’s just a fun thing having him in that running back room.” Brown considers himself one of the more quiet running backs, but Bergeron and the rest of the backs don’t give Brown a choice but to be less serious.

“If I’m around them you really can’t be quiet because they’re real fun to be around,” Brown said.

Now that Bergeron is a sophomore, he is more comfortable with the offense and it seems that he will only improve from here. Although the injury ended his game against Ole Miss, the Longhorns’ bye week has come at a good time for him.

Brown believes that the team has the ability to have more than one 1,000-yard rusher this “I think he’s running harder,” safety Kenny Vaccaro said.

Last year he helped the Longhorns finish the season ranked 21st in rushing offense with 202.62 yards per game. Now Bergeron and Brown have welcomed freshman Johnathan Gray to the team.

The three of them, along with Jeremy Hills, have the potential to be the most dominant running back group in the nation.

And with Bergeron around, they will certainly have some laughs along the way.

Printed on Tuesday, September 18, 2012 as: Bergeron's quirkiness helps him excel