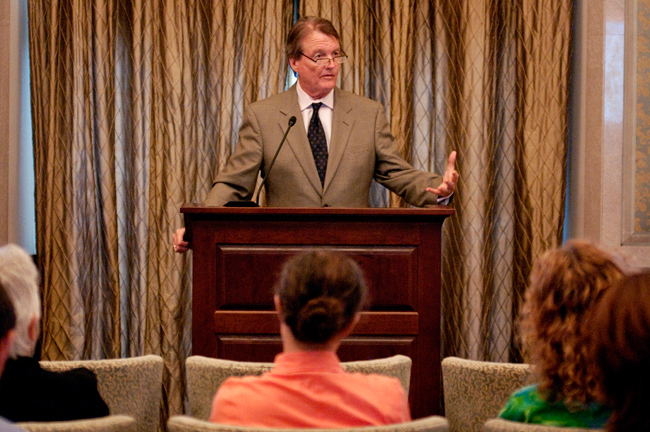 The University will now review tenured faculty annually on a four-category scale instead of every six years, as part of a new post-tenure review process. The new rating system will also extend to non-tenured faculty members.

Details of the new post-tenure evaluations were announced during the Faculty Council’s first meeting of the semester Monday. The new guidelines require annual evaluations of tenured and non-tenured faculty who will be categorized into four groups: “exceeds expectations,” “meets expectations,” “does not meet expectations” and “unsatisfactory.” Tenured faculty will also undergo regular comprehensive reviews every six years. The UT System Board of Regents approved the stricter review process in February despite faculty opposition.

Since 1998, when the Texas Legislature first mandated post-tenure review of faculty at state-supported universities, UT has conducted comprehensive evaluations of its professors every six years. They were categorized as “satisfactory” and “unsatisfactory,” and the reviews were not directly used as grounds for dismissal. Non-tenured faculty have always been reviewed annually on overall performance, but did not receive ratings. Tenured faculty performance was not evaluated on a yearly basis.

The new guidelines also link unsatisfactory ratings to possible dismissal from the University. Under the previous system, 2 percent of tenured faculty were rated as unsatisfactory during post-tenure reviews between 1998 and 2009, according to documents from the Office of the Executive Vice President and Provost.

If a faculty member receives two consecutive unsatisfactory ratings, they may be subject to a comprehensive review. Faculty may also be subject to disciplinary action, including dismissal, if their rating is attributed to incompetence, neglect of duty or “other good causes,” according to the UT regents’ new rule.

UT President William Powers Jr. said the new four-category scale allows the University to distinguish between faculty who need to improve in a certain area and faculty failing to perform their job duties.

“In any big institution, you’re going to have people not doing adequate work, which is not necessarily tied to dismissal, but still have things to be worked on,” Powers said. “Should your evaluative process be more granulated than a satisfactory or unsatisfactory? Of course, it should be.”

Faculty Council chair elect Hillary Hart said she was confused about why the four-category scale is necessary.

“Isn’t ‘failed to meet expectations’ and ‘unsatisfactory’ the same?” she said.

Powers said the faculty reviews should take into consideration the needs of a department, strategic market pressures and other aspects that affect faculty decisions when determining a faculty member’s performance.

“These are things that you can’t know by a ‘meets expectations’ rating,” he said.

Powers said he hopes the new metrics for annual reviews will also serve as reviews for regular salary increases. He said he hopes to get around the bureaucracy of having two separate processes for these determinations.

The University’s Committee of Counsel on Academic Freedom and Responsibility oversees faculty review appeals. The committee’s chair, Brian Evans, said instances of dismissal will be reviewed by the appropriate deans and department chairs on a case-by-case basis. Faculty development plans will be implemented to improve performance in areas found to be unsatisfactory.

Evans said his committee reviewed one appeal a year for the last three years under the previous system.