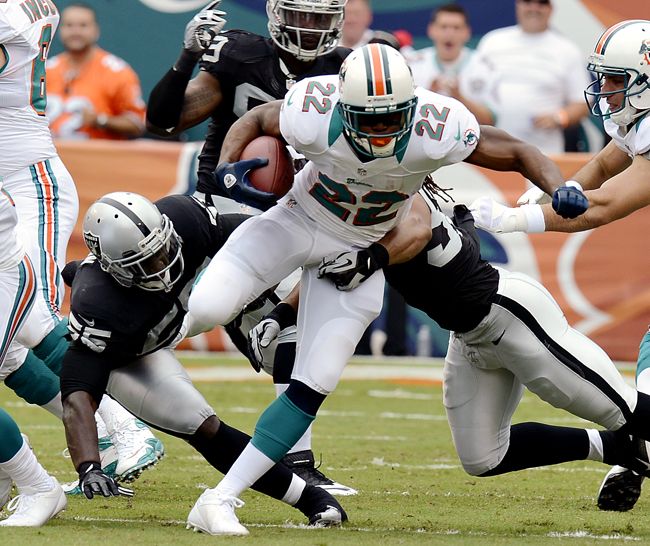 Dolphins running back Reggie Bush made a splash against the Oakland Raiders on Sunday, tallying two touchdowns.

With two weeks of NFL games in the books, fantasy football frenzy has once again taken over. To ease the stress of creating a powerhouse starting lineup this week, here are a few players to embrace and a few others to avoid:

1) Reggie Bush, RB, Miami Dolphins
Wow, Bush played a great game against the Oakland Raiders on Sunday, rushing for 172 yards and two touchdowns. The question now is whether or not Bush can do it again this week against the Jets and Rex Ryan’s defense. There’s reason to believe he can and he will. The Jets surrendered a total of 194 yards to C.J. Spiller in Week 1, a player with speed and elusiveness similar to Bush’s. With a rookie quarterback under center for the Dolphins, expect Bush to get the ball early and often.

2) Demaryius Thomas, WR, Denver Broncos
Despite the Broncos’ lackluster performance as a team Monday against the Falcons, Thomas had a solid outing, catching eight balls for 78 yards and one touchdown. Over the span of two games, Thomas has almost 200 yards receiving and is clearly Peyton Manning’s primary target. Although cornerback Johnathan Joseph will challenge him this week when the Broncos face the Texans, Thomas will get plenty of passes thrown his way and should be able to put up big numbers.

3) Matthew Stafford, QB, Detroit Lions
Stafford has been a disappointment up to this point in the season, managing only two touchdowns while tossing four interceptions. In his defense, he faced an improved Rams defense in Week 1 and arguably the best defense in the NFL in San Francisco this past week. Expect Stafford to break out of his early-season slump and throw for several scores against the Tennessee Titans, who allowed three passing touchdowns from Philip Rivers in Week 2.

1) Michael Turner, RB,  Atlanta Falcons
Turner’s start to the season had been anything but ideal even before he was pulled over for speeding and drunken driving Tuesday. Turner has managed a measly 74 yards rushing and a touchdown in the Falcons’ two victories, numbers that will make any fantasy owner cringe. Unfortunately for Turner, things are unlikely to improve this week when he faces the San Diego Chargers, who lead the NFL in rush defense.

2) Jackie Battle, RB,  San Diego Chargers
Many fantasy owners will be tempted to jump on the Jackie Battle bandwagon following his 69-yard, two-touchdown performance against the Titans on Sunday. However, Battle appears to be fool’s gold and should not be viewed as a reliable fantasy threat. With a healthy Ryan Mathews set to return this week, expect Battle’s workload to diminish significantly outside of a few goal line plays, making him a risky player.

3) Sam Bradford, QB, St. Louis Rams
Bradford torched the Redskins this past Sunday, passing for 310 yards and three touchdowns. Despite this, do not expect Bradford to put up similar numbers Sunday against a tough, physical Chicago Bears defense. Given the Bears’ ability to pressure opposing quarterbacks and the Rams’ instability along the offensive line, Bradford could struggle.

Printed on Thursday, September 20, 2012 as: Starting Bush a no-brainer